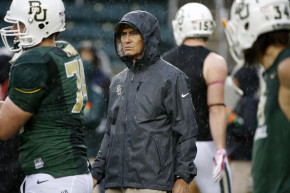 This is the seventh Title IX suit filed against the university

A seventh Title IX lawsuit filed against Baylor University contains the devastating allegation that the Jane Doe plaintiff was drugged and gang-raped by “at least four” and “as many as eight” football players in 2012. The complaint says such acts were considered “bonding” by the team and repeats previous allegations of Baylor’s striking inaction in policing the football program.

Another bombshell in the suit is that the plaintiff is said to have confirmed the existence of at least one “21-second videotape of two female Baylor students being gang raped by several Baylor football players” which “was circulated amongst football players.”

The suit also alleges that football players burglarized her apartment and that the team held parties with dog-fighting matches, with at least one dog suffering serious injury and nearly dying. The plaintiff says she paid that dog’s urgent treatment costs but that players later accused her of stealing the dog.

Baylor responded with this statement to the Waco Tribune-Herald, saying the school has been in touch with the plaintiff’s attorney for “many months” while seeking a resolution.

.@Baylor statement on today's Title IX lawsuit filed against school alleging a gang rape by as many as 8 football players pic.twitter.com/vKnyKsX36S

The suit offered a reminder of the scope of Baylor’s rape culture, relaying the findings of the investigation conducted by law firm Pepper Hamilton that “a total of 17 victims reported allegations of sexual assault or domestic violence by 19 Baylor football players. At least four of these incidents of sexual assault involved gang rapes that were reported to have occurred in 2012. One of these gang rapes involved Plaintiff. However, according to more recent reports, in the span of four years—from 2011 to 2014—there were at least 52 acts of rape, including five gang rapes, by not less than 31 different football players under [head football coach Art] Briles.”

The plaintiff says that, after the assault, she “remembers hearing the players yell ‘Grab her phone! Delete my numbers and texts!’” Per the suit, one football player later claimed to her that the act was consensual and also said another player had taken nude photographers of her. The players are also alleged to have spread rumors about the team “riding train” on her.

She alleges that a counselor at the Baylor University Counseling Center, upon learning of the incident, “cited statistics about the number of women who decide not to report sexual assaults” and did not present the plaintiff with her “rights or options” for reporting the incident or receiving accommodations. Jane Doe alleged that Baylor officials urged her not to speak with reporters. The suit states that Baylor later independently confirmed that no one reported her sexual assault accusation to anyone in the school’s Judicial Affairs office.

According to the complaint, the plaintiff’s mother contacted an assistant football coach in July 2012. The mother is said to have provided a list of names of players who were accused of participating in the assault, but the mother never heard from the coach again. The coach, however, apparently spoke to two of the accused players, a fact acknowledged by the school’s Board of Regents, with the players downplaying the incident as “a little bit of playtime,” with the assistant coach concluding that the accusations were in a “gray area.” Those football players are alleged to have created fake telephone numbers and harassed the plaintiff and her family via text messages.

After the plaintiff, a Baylor volleyball player, and her parents told the head volleyball coach about the incident, her coach was said to have provided Briles with details of the incident and a list of the accused. Briles allegedly looked at the list and said, “those are some bad dudes…why was she around those guys?”