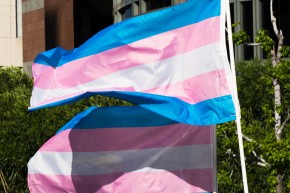 Transgender people in the Silver State may no longer have to publicize their name change in their local newspapers.

A Nevada bill proposing that transgender people who are changing their names should not be forced to publicize their name change in local newspapers unanimously passed through both the state’s senate and assembly on Tuesday.

The bill, which just needs Nevada Gov. Brian Sandoval’s signature for it to become a law, would help transgender people maintain their privacy through their transition and shed the need to publicize the change in a newspaper, which is a legal requirement in several states. Currently, the state requires people who want to change their names to place an announcement listing their old and new names in a newspaper once a week for three weeks, according to the Las Vegas Review-Journal. This requirement can be waived if there is a personal safety concern, a provision that’s present in most states that require publication. If signed into law, the provision would be amended to say that anyone making the change “to conform the applicant’s name to his or her gender identity” is not required to publicize it.

For the transgender community in Nevada, it’s a significant win. One letter to the Nevada legislature written in support of the bill came from a woman who said that her name change announcement was seen by someone she knew, who then threatened to shoot her. Another transgender woman noted that some transgender people may not be able to afford placing those announcements.

The Nevada case is a window into the varying state laws on whether someone can change their name without having to announce it in a newspaper. According to the National Center for Transgender Equality, California is currently the only state that waives the requirement for specifically for transgender people. In Illinois, the state requires an announcement in a newspaper for three consecutive weeks but will waive that if the person is in a witness-protection program. North Carolina requires people who want their names changed to publish a notice on the courthouse door for 10 days; they also must submit two letters testifying to their “good character” as well as criminal record check. States like Connecticut and Texas don’t require any publication.

Advocates, such as Kyle Rapiñan, director of the Survival and Self-Determination Project with the Sylvia Rivera Law Project in New York, hoped that the Nevada ruling can be an example for other states to follow.

“We hope other states will move away from the publication requirement so trans people and other marginalized groups can have names and identities more accurately reflect who they and so folks can access more affirming IDs and be free from discrimination and prejudice,” Rapiñan told Vocativ in an email.