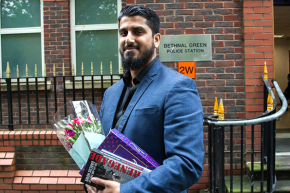 UK Activist Arrested For Refusing To Unlock Phone At Airport

The U.K. is pressing charges against a British activist who refused to unlock his phone and computer when flying home through London’s Heathrow airport

The charges follow a previous incident in which British border agents detained Muhammad Rabbani, the international director of CAGE, a U.K.-based human rights group that advocates for torture victims and those negatively affected by western antiterrorism efforts. Rabbani, who says he has been detained around 20 times while entering and leaving the U.K., refused to comply with border guards who asked him to hand over the passwords to unlock his devices, which he said contain client information about a sensitive case involving torture by the US government.

“Mr. Rabbani was unable to hand over the passwords to his devices as he was carrying crucial evidence taken from a torture survivor and did not have permission from the client to share the information,” wrote CAGE, in a press statement following Rabbani’s arrest earlier today at Bethnal Green police station. “Mr. Rabbani has taken a principled stance to protect the right to privacy in an ongoing case of torture that implicates high ranking officials.”

Rabbani now faces charges of “wilfully obstructing or seeking to frustrate a search examination” under Schedule 7 of the U.K.’s Terrorism Act, a controversial statute that has been used against journalists and activists. In 2013, the U.K. used the same law to detain David Miranda, the partner of journalist Glenn Greenwald, when he landed Heathrow carrying sensitive documents from National Security Agency whistleblower Edward Snowden.

The arrest follows an escalation of efforts by both the U.S. and U.K. governments to force travelers to unlock their devices without a warrant — allowing border agents to inspect or copy the troves of emails, location data, chats, and internet browsing histories contained inside.

As Vocativ previously reported, many of those affected by President Donald Trump’s executive order banning travel from Muslim-majority countries were coerced into unlocking their phones and computers while being detained at airports across the U.S.

Many of those forced to share their phone and computer contents were U.S. citizens. Civil rights groups are suing the Department of Homeland Security for 10 separate instances in which border agents specifically targeted American Muslims.