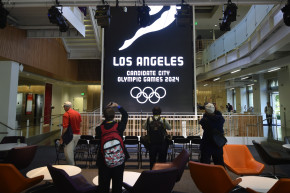 In its most recent fiscal year of 2016, the United States Olympic Committee paid the International Olympics Committee $10 million in administrative costs as part a revenue-sharing agreement that made Los Angeles’s bid to host the 2024 Games a possibility

It’s an increase from the $5 million the USOC doled out in 2014, which went to defray expenses racked up by the IOC during the Winter Olympics in Sochi, and in 2020, the USOC will pay $20 million. While those may seem like lofty amounts, according to the Associated Press, it represented a mere 3.9 percent of the USOC’s $336 million in total revenue. But the current agreement is actually a downgrade from the amount paid in the 90s and early 2000s, one that the rest of the world perceived as a de-facto payoff in exchange for “special treatment.”

Way back in 2008, when Peter Ueberroth left his post as USOC chairman, he claimed that the degree to which the USOC bolstered the IOC’s bottom line with billion-dollar TV deals meant the USOC’s bids deserved to be placed on a higher rung.

“Who pays the bill for the world Olympic movement?” he said. “Make no mistake about it. … U.S. corporations have paid 60 percent of all the money, period. Be sure you all understand that. The rest of the world pays 40 percent. It’s pretty simple math.”

In response, non-American IOC voters helped to scuttle Chicago and New York’s efforts to secure the 2012 and 2016 Summer Games, respectively. (And yes, Chicago is still feeling the economic burn of participating in the bidding process eight years after the fact.)

Larry Probst took over for Ueberroth, promising that the USOC wouldn’t submit any bids until the revenue-sharing issues were resolved to the international community’s satisfaction. Though the USOC and IOC were still hammering out the details until 2012, the 2009 Chicago bid to host the 2016 Games was subverted not just by international opposition, but by a lack of support from the USOC and the same goes for Las Vegas’s failed attempt to secure the 2020 Games.

As for the current agreement, the exact figures remain unknown, but according to unnamed USOC officals, the USOC will still get 12.75 percent of United States broadcasting deals, but should a pricier offer emerge, that would be cut to 7 percent. The marketing share, which was 20 percent, would be halved, again, dependent on an an increase in sponsorship dollars.

And even with the Associated Press poring through the USOC’s most recent tax return, out of the $173 million in broadcast rights and $121 million in sponsorship deals the USOC earned in FY2016, they can only report that “some” of those totals were paid out by the IOC.

Speaking of secrecy, LA2024 is taking pains to conceal exactly what promises were made to the IOC during the three-day inspection tour which ended on May 13, lest Paris steal all its good ideas.

“We are in a competitive environment right now,” IOC executive Patrick Baumann, said, according to the Los Angeles Times. Bauman went on to add, “I mean, people in Paris would have been extremely happy to listen to those conversations.”

They did post a nice photo of LA2024 and IOC officials smiling and looking happy, which is nice.

Thank you to our friends @Olympics Evaluation Commission for letting us share our city & Olympic dream with you. #FollowTheSun & bon voyage! pic.twitter.com/uwcj0GogOU

But according to a report from Around The Rings, all of this furtiveness is just for show. The odds are growing that the IOC will announce that Los Angeles and Paris have been awarded the next two Olympics in one fell swoop, allowing the IOC to dodge any lingering questions about the grassroots, anti-Olympics protest movements that have sprung up around the globe.

Whichever city loses out will be thrown the 2028 Games as a consolation prize. That may be tough for either Los Angeles or Paris to swallow, given that it’ll mean racking up an additional four years’ worth of expenses. Either way, the actual residents of both cities are sure to get screwed.

The hereditary aristocrats of @iocmedia are notorious for making absurd demands during the Games. Here’s just one of them. #GetOutIOC pic.twitter.com/qrbLYos6IP