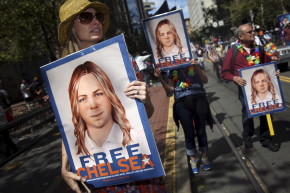 On Day Of Release, Chelsea Manning Is Still Being Misgendered
By Ethan Harfenist

On Day Of Release, Chelsea Manning Is Still Being Misgendered

Those who are against her sentence commutation have continued to use her previous gender pronouns to demean her.

People call for the release of Manning while marching in a pride parade in San Francisco. — REUTERS
By Ethan Harfenist
May 17, 2017 at 1:11 PM ET

On Wednesday, Chelsea Manning was released from a military prison in Leavenworth, Kansas, ending a seven-year stint behind bars. But as the former intelligence officer adjusts to life after prison, right-wing Twitter users and media outlets alike, many of which are angered over her freedom, continue to misgender her.

Manning, who was originally known as Pvt. Bradley Manning, was sentenced 35 years in prison in 2013 for leaking classified information to WikiLeaks. Shortly after, she announced that she was a transgender woman and began going by her new name. In January, former President Barack Obama, in one of his last acts as president, commuted all but four months of her sentence.

But despite mainstream outlets and government officials using Manning’s preferred female pronouns and name after her announcement years ago, right-wing Twitter users are using the occasion of her freedom to misgender the whistleblower.

After WikiLeaks founder Julian Assange tweeted in a celebratory note regarding Manning’s freedom, some users took the opportunity to spew hate about her or use her former name.

Wednesday’s vitriol served as a reminder of how some right-wing media personalities have identified Manning’s gender. On Monday, Tomi Lahren, the former star of Glen Beck’s The Blaze, published a video focused on “Chelsea Bradley Manning taking advantage of military benefits and hormone treatments.” Other sites, such as Tucker Carlson’s The Daily Caller and Ben Shapiro’s The Daily Wire, have also used that name, and others, to identify Manning. Around the time Obama commuted her sentence, The Blaze’s Matt Walsh wrote a piece on Manning, with the headline, “Bradley Manning is still a traitor. And he’s also still a man.” And Fox News’ “Fox & Friends” has demonstrated a history of misgendering Manning, according to Media Matters, calling her everything from “Bradleen” to “gender bender.”

Others, however, have chosen to celebrate Manning’s freedom, while properly identifying her.

“While we celebrate her freedom, we will continue to call for an independent investigation into the potential human rights violations she exposed, and for protections to be put in place to ensure whistleblowers like Chelsea are never again subjected to such appalling treatment,” said Margaret Huang, executive director of Amnesty International U.S., in a statement.