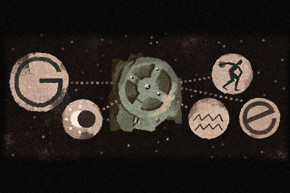 Google’s Doodle Features The Antikythera Mechanism — But What Is It?
By Alejandro Alba

This Grocery Drives Itself To Your Door
By Ruby Nitzberg
History

Google’s Doodle Features The Antikythera Mechanism — But What Is It?

The 2,000-year-old Greek computer was basically a clock and calendar

Long before the computing revolution of the last 40 years, the was another computer predicting eclipses and astronomical positions — exactly 2,000 years ago.

Today marks the 115-year anniversary of the discovery of the Antikythera mechanism, which is considered to be the world’s first computer. To celebrate the discovery, Google dedicated today’s Doodle to the piece of brass. The Antikythera is a clock-sized device containing more than 30 bronze gearwheels and covered in Greek inscriptions. It dates back to sometime between 200 and 70 BCE, but it was salvaged from a shipwreck in 1901 in the Mediterranean Sea.

Since its discovery, scientists and archeologists have tried reconstructing the Antikythera with X-rays and CT scans to understand how the ancient Greeks utilized it. Tests have revealed the mechanism had a large circular dial on the front, two concentric scales, and other pointers to help track the sun, moon, and the planets. One of the scales had the name of the months and divided into 365 days, and the other was divided into 360 degrees and marked with the 12 signs of the zodiac.

Greeks used the Antikythera to keep track of the time and date and help plan future events, such as athletic competitions. They would also use it to predict solar and lunar eclipses, as well as other astronomical events.

The concept of a computer might seem to be modern and arguably something that consist of wires, circuits, and digital code — but the Antikythera is a computer nonetheless. It was still used to compute. Users (the Greeks) would input variables and the mechanism would yield results, therefore it was a computer in the most basic sense of the word.

Researchers are still trying to decipher exactly how the Antikythera was used and by whom, but they are still missing several pieces of the puzzle to see the whole picture. In 2016, a team of astronomers, historians, and archeologists — who’ve been working on the mechanism for over a decade — discovered “a more than 3,500-word explanatory text on the main plate of the instrument.” The text eventually helped them get a little closer to how it operated.

There have been no other Antikythera mechanisms found to date, but researchers hope they can find another by going back the area of the shipwreck and look — or at least salvage other missing pieces that can provide more context.