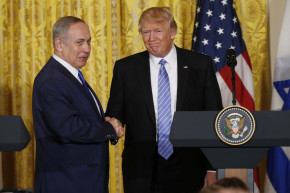 To Israelis, Trump seems to have done everything wrong ahead of his first overseas visit, but they insist relations are still strong

President Donald Trump and Israeli Prime Minister Benjamin Netanyahu in Washington — REUTERS
By Shira Rubin
May 17, 2017 at 10:22 AM ET

Less than a week before President Donald Trump’s first visit to Israel, the American president is not making things easy for his Israeli counterpart, Prime Minister Benjamin Netanyahu, most notably by voluntarily revealing Israeli espionage secrets to the Russians, as reported by the New York Times on Tuesday.

Trump reportedly called Netanyahu on Tuesday to discuss the visit, dispelling rumors Trump was considering cancelling the trip. The 20-minute call, said to have occurred around 5 pm Israel time, followed Trump’s call with King Abdullah of Jordan. It was not publicized by the White House or the Prime Minister’s office, although Netanyahu’s office did confirm to the Israeli daily Haaretz that the call took place.

“The conversation dealt with a few issues that needed to be concluded regarding President Trump’s visit to Israel,” an anonymous senior official told Haaretz, who said the two leaders did not discuss the Russia intelligence leak. The reticence from both the Israelis and the Americans may reflect an attempt to control the fallout of the news ahead of Trump’s first foreign trip as president, and for Netanyahu, who is politically embattled at home who has boasted of close ties to Trump.

Israeli intelligence officials agree on the severity of the intelligence leak, which endangered the life of an Israeli agent who had infiltrated ISIS, according to an ABC report.

“There are rules, which are diligently preserved: you never ever ever reveal a source, neither your own or that belonging to an organization you’re working with,” Avi Dagan, the former chief of an elite Mossad unit, told Walla News. “If it’s true, the information transferred from one country to another was agreed upon — but in these agreements there is never an understanding of handing over the information to a third country, certainly not a state that is not a friend of either country,” said Dagan, referring to reports that the Israeli secret intelligence was passed onto Russia made its way onto Iran.

But the chaos and mixed messages continue to flow in, with White House staff constantly making changes to Trump’s two-day schedule, and forcing their Israeli counterparts racing to keep up. The White House announced it was moving the presidential speech from Masada — the hilltop fortress where first-century Jewish rebels are said to have committed mass suicide rather than die at the hands of encroaching Romans, and which has long symbolized Zionism as the victorious underdog — to the Israel Museum in Jerusalem. It was reportedly done because Trump realized that Masada, which is in the desert, will be hot.

On Monday, two U.S. officials told their Israeli counterparts they would not be allowed to accompany the president to the Western Wall, saying, “it is not your territory, it’s part of the West Bank.” It caused an uproar in Israel and spurred the White House to try to distance itself from the incident. White House Press Secretary Sean Spicer insisted that the administration was aware of the site being located in Jerusalem.

A day later, U.S. ambassador to the UN Nikki Haley said the Western Wall belongs to Israel and that the U.S. embassy should be moved to Jerusalem, another one of Trump’s campaign promises from which the White House has been trying to back away. “The capital should be Jerusalem and the embassy should be moved to Jerusalem, because [Israel’s] government is in Jerusalem … The tricky part is where the Palestinians come in on this and where the Israelis comes in on this,” Haley said.

If Trump goes to the Western Wall, he will be the first sitting president to visit the holy site, which has historically been left off presidents’ schedule since its location in Jerusalem is on disputed territory that was under Jordanian control before the 1967 Arab-Israeli war.

The Trump team also rejected Israeli requests to organize welcoming speeches at the airport, instead saying they will do a quick ceremony without any handshakes before heading to Jerusalem. Trump has allocated a mere 15 minutes minutes for time at the Holocaust museum Yad Vashem and 40 minutes for meeting with Palestinian President Mahmoud Abbas in Bethlehem.

“Even die-hard right-wingers must be wondering by now if their great hero Trump is really better for Israel than their favorite villain Barack Obama,” wrote Israeli journalist Chemi Shalev in Haaretz.

But despite multiple setbacks and the overall atmosphere of tumult, Netanyahu and Israeli officials are determined to make the visit work.

“This relationship w/ the US is unprecedented in its contribution to our strength. This is how it has been & how it will continue to be,” tweeted Israeli defense minister Avigdor Lieberman on Wednesday in Hebrew and English.

Amnon Sofrin, the former head of Mossad’s intelligence directorate, insisted that “collaboration between the Israeli and American intelligence community is very intimate, we share a lot of sensitive information,” and won’t be affected by the latest scandal.

“But if this really happened, it may cause a big problems for us, because it may cause damage to our activities,” he said. “Of course, none of us in the intelligence community likes this event, but we will put it aside so that the visit can be very successful.”

Trump has never visited Israel, though in October he sent a handwritten note to be placed in the Western Wall, a Jewish ritual by which people place prayers in the cracks of the holy site. It read, “LORD: May you bless the United States, our armed forces and our allies. May your guiding hand protect and strengthen our great nation.”

It was not written by Trump himself, but by Jewish advisor David Faiman, his campaign director for Jewish Outreach, according to Israeli media.