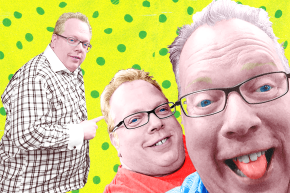 Every day for some 15 years, Joel Oks, the proprietor of menswear chain Portabella, would emerge from his shop, saunter onto the sidewalk, turn around, and drop his trousers.

“He’d give us that nice, shiny moon he has,” Hall of Fame St. Louis Cardinals shortstop Ozzie Smith said.

In the not-so-old days of baseball—the late ‘80s and ‘90s—players all used to take the team bus to the stadium, rather than arrive early by way of taxi or Uber. Back then, clubs almost uniformly stayed at the Grand Hyatt hotel alongside Grand Central Station, conveniently within spitting distance of the 42nd Street Portabella flagship store. As the team bus pulled away from the curb, a veteran player—with the Cardinals, for instance, it’d be Smith—would casually play tour guide, directing the younger players to look across the street.

“Hey, look over at this store,” Smith would say. “That’s a pretty interesting store.”

As Oks recalls, the daily ritual began in conversation with a few veteran Cardinals like Smith and former All-Star Pedro Guerrero. It was 1989 or thereabouts. Details are a little hazy. Their banter one day devolved into talk of pranks. Oks said he’d moon the Cardinals bus. The players called his bluff. Oks was adamant. Smith remembers thinking, “Yeah, right.”

“They didn’t believe me, so I did it, and from there, it carried on for many years,” Oks, now 55, said. “Every day, every time the bus would pass, I would take off my pants and show my beautiful behind. They just couldn’t believe that, the middle of New York, you could do that and not get in trouble, so I kept doing it.”

Oks went about the act unimpeded for so long that he inherited the nickname of the Manhattan Mooner. One of his pals, Rickey Henderson, was the rare player who opted against the team bus—except for once per series in New York, just so he could see the spectacle.

One time, Braves coach and former player Eddie Perez recalled a police officer happened to be walking by and stopped Oks, asking, “What are you doing?”

Oks apparently retorted, “I do whatever I want. That’s my store.”

Among the dozens of framed photos hung on the walls of Portabella, nearly all showing visits and interactions with baseball glitterati, none is more curious than the photo of Oks with Jose Canseco. One of them is shirtless—and it’s not the former steroid-taking, bodybuilding American League MVP. Oks explained he simply wanted “to show my body next to his body.”

His Midtown store, the flagship of about 40 locations, also has plenty of memorabilia: bats from Angels superstar Mike Trout, Dodgers outfielder Yasiel Puig, retired slugger Prince Fielder, and retired Red Sox legend David Ortiz. Oks said Ortiz’s lumber was the last bat the slugger ever used at Yankee Stadium, handing it to his pal after drawing a walk and being pinch-run for in his final game last September.

The Instagram account of Oks, a Yankees fan known widely as “Super Joe,” is populated with candids of bold-faced baseball names—current or likely Hall of Famers including Smith, Henderson, Ken Griffey Jr., Albert Pujols, and Eddie Murray, among others. Yet more populate the comments section: Alex Rodriguez, Moises Alou, LaTroy Hawkins, and Carlos Gomez have all chimed in via their verified accounts.

3 hof Ozzie Rickey and the hawkgreat guys and great friends

Players often hear from him mid-game, too, owing to his premium season tickets in both New York ballparks. He sits in the second row immediately adjacent to the near side of the visiting team’s dugout at Yankee Stadium, a perfect perch from which to chirp at players in the on-deck circle or emerging from the clubhouse tunnel.

As retired Braves great Chipper Jones recounted in his recent autobiography, “Ballplayer,” Oks would often ask, “How’s your whole?” After a pause, Oks would add, “Family.”

The ballplayers Oks consorts with skews to the older set of retirees and vets close to hanging their cleats up, but a few younger stars like Manny Machado, Madison Bumgarner, and Robinson Cano are part of his social circle. “They’re crazy, these kids,” Oks said. “I can’t eat a lot and stay out too late. I’m too old.”

mr.Machado shopping at Porta Bella what a MAN tremendous person A post shared by Joel Oks (@superjoes) on Apr 30, 2017 at 4:48am PDT

Smith said Oks knows “just about everybody in baseball, especially all the players,” and he joked that there’s usually a clear pecking order. “We all get numbered now, as to how we stand in his life,” Smith said. “I guess right now Carlos Beltran probably is No. 1. I used to be No. 1. I was there for a long time.”

Beltran said that, as a Puerto Rico native who first cracked the majors in Kansas City, New York City’s size was initially overwhelming when he moved there to play for the Mets. Oks showed him around, and Beltran’s family ultimately grew so comfortable that they live in New York year-round.

“Joe is a great guy, man,” Beltran said. “I call him my brother because of the relationship we have. “I have had the opportunity to love the city of New York because of him.”

Beltran was a young Royals player when he met Oks early in his career, at the introduction of veteran teammates Luis Alicea and Roberto Hernandez. That’s how just about everyone meets Oks. Yankees second baseman Starlin Castro said Beltran brokered an introduction last summer. And so the cycle goes on.

Oks’s prolific connectivity throughout the baseball world started in 1984 when players casually moseyed in to shop, owing to its proximity to the Grand Hyatt. “By accident,” Oks said, “they all started coming in.” The first big star to visit and spread the word was Dave Parker. Smith said he was an early riser looking for something to do before a ballgame when he initially went inside and soon brought others. When Braves coach Terry Pendleton was playing for the Cardinals in 1984, he remembers older teammates Smith and Willie McGee bringing him by.

“I walked in the store, and he immediately started calling me every name,” Pendleton said. “I had never met this guy before. ‘Who in the heck is this dude?’ He was just starting at me. I was looking at Ozzie and Willie, and they’re just laughing, just laughing the whole time.

Indeed, all his baseball friends comment on Oks’s back-and-forth, give-and-take jocularity, often culminating in a friendly wager. Players speak about coming by for lunch, with Oks catering to their specific tastes. Jones wrote that Oks always had his favorite Chinese dish, Shrimp Grand Marnier, awaiting his visit. The players all cited his generosity of spirit as a reason why Oks has endeared himself around the game.

Oks’s only request is to visit. “I love that guy,” Perez said. “Every time I come here, I have to go. If you don’t show, he’ll text you and call you. ‘Where are you?’”

Beltran and Oks now have a deal. Oks helps look after Beltran’s family while he’s out of town; when Beltran returns, he takes care of Oks. Of course even that comes with a tease. “I make fun with him,” Beltran said with a smile, “because I always say, ‘Why do you always take my family to diners? And when I come back, you want to go to the most expensive restaurants?’”

Another folksy bet come to life: Oks always wanted to be a bat boy. He told everybody. One of his friends, Tony Peña, later became manager of the Royals. An invitation ensued, with Oks realizing his dream in a Royals-at-Yankees game on August 7, 2002.

Peña calls Oks a “great, great guy,” but his recollection of his brief tenure in uniform was far less effusive. “He started hot, then he got tired,” Peña said with a laugh, while pantomiming a hunched-over Oks sitting down, hands on knees and out of breath.

A photo on his Instagram account memorialized the event. The scoreboard indicates that the Royals’ No. 3 hitter was about to bat against the Yankees’ Roger Clemens. That batter: Beltran.

“Man, wow, he did that,” Beltran said at the memory, when asked for an evaluation of Oks’s bat boy performance. “Terrible, terrible. He was terrible—out of shape, slow to pick up the bat, and you needed to remind him, ‘Hey, go get the bat, bro. Go get the bat.’ He had no clue what the hell he was doing.” Beltran conceded that it’s a harder job than it looks but added, “He was horrible. He never got invited again.”

Dismal bat boy performance notwithstanding, Oks’s store remains a baseball mainstay even after a recent relocation, from its 42nd Street spot cater-cornered from the Grand Hyatt to one uptown 15 blocks and over on Lexington Avenue, not far from Bloomingdale’s and rest of the East ‘50s shopping sprawl. (The rent was too damn high.) Oks stressed about the move, but the parade of visitors has shown no evidence of slowing down.

“People will go to see you,” Beltran said, “because of who you are.”