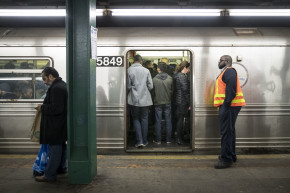 How much exercise do people really get when they walk to the bus or subway stop every day? Enough to actually reduce obesity in their communities, at least according to a study of county-by-county data in the journal Preventive Medicine.

If you’re skeptical a few extra minutes — or quite a bit more than that, for those living in transit deserts — spent walking to a bus stop is really enough exercise to make a difference in people’s weight, that’s understandable. Even the researchers behind this new study take time in their paper running through all the possible confounding factors that could explain this potential link between higher rates of public transit use and lower rates of obesity.

But their model, which looked at county data to get as fine-grained a view as possible, was able to control for and eliminate many other factors that affect obesity, like average income, poverty rate, health care access, and amount of leisure time. In other words, they write, this isn’t just a question of, say, people in the cities — where public transit is most heavily used — being generally healthier than those in the suburbs and country for reasons that have nothing to do with their subway use.

Even after all that, the researchers were still able to pull out an effect: For every one percent increase in frequent public transit users, there was a 0.2 percent decrease in the obesity rate. That may not sound massive, but it’s about the same as the predicted effect on obesity if there were a similar increase in people engaging in physical activity or exercise during their leisure time. Those minutes walking to and from the subway platform every day can really add up.

Sure, constructing nationwide public transit isn’t going to solve the obesity epidemic: a small average decrease can only do so much when the obesity rate in the United States is about 36 percent. But the researchers argue it’s one more reason among many to get behind mass transit, with the public health benefits slotting in alongside buses and rail giving more people freedom of movement and such transit being more environmentally friendly than cars.