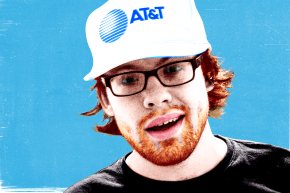 Is Andrew 'weev' Auernheimer behind an effort to manufacture controversy around Emmanuel Macron?

A group of researchers say that an anonymous effort to help the far-right Marine Le Pen in France’s presidential election — by forging documents to smear her opponent — bears hallmarks of the U.S.’s most infamous neo-Nazi hacker.

The site was first teased on the anonymous message board 4Chan in threads where an anonymous user uploaded faked documents that purported to show a nonexistent offsite Macron bank account in the Bahamas.

One user, thought to be weev, touted an upcoming site to host the documents: “nouveaumartel.com,” which isn’t any longer a functional site, showed a forged tax return that purported to show documents pertaining to the supposed bank account.

Several posters specifically cited and congratulated weev for the site. VirtualRoad’s analysis of nouveaumartel.com shows it shares internet protocol addresses with the Daily Stormer. And the person who registered it used the name “weevlos.”

Leaked documents played a major role in the lead-up to the 2016 U.S. presidential election, though it’s impossible to tell how they affected the vote. The U.S. intelligence community has declared that the Russian government specifically directed the hacking of several Democratic party servers, and the subsequent leaking of files to journalists and to WikiLeaks. In a different instance, hackers broke into a think tank and shared a dump of its files — after adding a faked document that purported to show it had given Hillary Clinton improper campaign donations.

It’s unclear if weev would face any legal trouble if he was behind the efforts to defame Macron. A French security official told the Wall Street Journal that the country is investigating neo-Nazis’ roles in the election.