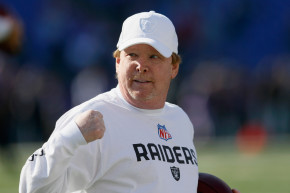 And they're not getting much resistance

The Oakland Raiders and Las Vegas are the final negotiations on what is expected to be a 30-year lease, and while the team seemingly has zero leverage, it’s the city that seems determined to fold and give owner Mark Davis everything he desires.

The time remaining to complete the new stadium has always been extremely tight. By the Las Vegas Stadium Authority’s estimation, they’ve got a 30-month window once the first shovel breaks ground until the projected completion date. As CBS Sports noted, that’s… not a lot. The Minnesota Vikings’ new digs, U.S. Bank Stadium, took 32 months to build, and the Atlanta Falcons’ shiny palace, Mercedes-Benz Stadium, has suffered multiple setbacks. If everything goes perfectly and there are no further delays, the stadium will open after 39 months, six months later than originally projected.

But like Chicago Mayor Rahm Emanuel once said, “You never want a serious crisis to go to waste.” And so some Raiders execs have begun announcing that any snags in the ongoing lease negotiations would mean the Raiders could put off the move until 2021, something neither party wants to see happen.

Raiders President Marc Badain on Thursday said the lease agreement is on the agenda of the NFL league owners’ meetings scheduled to begin later this month. If one is not presented, there is a “distinct possibility” that team’s move to Sin City could be pushed until the 2021 season, Badain said.

“In order to approve a lease, you need full membership, and the league has four meetings a year: one in March, one in May, one in October and one in December,” Badain said after a public meeting of the Las Vegas Stadium Authority board. “So, if you miss the May deadline, you push to October, we would lose a year, and everybody wants to get this project going everybody wants to get these guys to work. So we didn’t want to miss that deadline.”

Badian is telling the (partial) truth here. Las Vegas clearly wants to have the Raiders in town ASAP, but look at the options facing the team. Davis can make all the mouth noises he wants about remaining in Oakland until the current lease expires at the conclusion of the 2018 season, and even hanging around longer than that, but Oakland clearly wants them gone. Keeping the Raiders costs the Oakland-Alameda County Coliseum Authority about $1 million per year, and, even if the stadium is completed on time, officials have made it clear that once the clock hits 2019, they’re gone, which is why Davis is already sniffing around in San Francisco and even San Antonio, looking for a temporary home.

Las Vegas could hold the Raiders’ feet to the fire, but given what’s transpired to date, the odds are against it. Clark County already okayed a $200 million highway renovation, paid for by state bonds and meant to solve any additional traffic woes presented by the Las Vegas stadium. And while Clark County Commission Chairman Steve Sisolak promised that the Raiders would contribute a “share” of the costs, there’s been no public accounting of what that share might be.

The Raiders probably won’t be forced to pay a single dollar in rent either, not when the chairman of the Las Vegas Stadium Authority explained that it would be irresponsible to make such a demand, considering, “the Raiders are going to be investing up to $1.15 billion and certainly taking the risk for any overruns,” he said. “So, in order to make that agreement make financial sense, the revenue from the stadium needed to flow to those investors.”

Hill also told CSN Bay Area that the NFL hasn’t pressured the city to put pen to paper. Instead, he’s just happy that, “They are investing obviously significantly in this community and they have started to do that, and I wouldn’t want to move too far forward if I didn’t know that I had a deal either.”

So the city has a certain amount of leverage here, yet they seemingly are unable or unwilling to make any use of it. Those are exactly he kind of two-fisted negotiating tactics that you’d expect from a municipality that chose to spend nearly a billion in taxpayer dollars in order to erect a stadium that sports economists believe is doomed to fail.