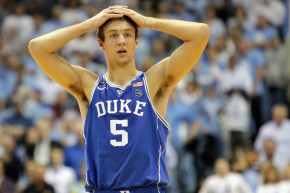 It's not just the athletes who don't get paid, apparently

Participation in college athletics is no longer an unpaid honor and privilege solely limited to the athletes themselves. A job posting for three openings as “Athletic Facilities, Game Operations and Championships Assistant” in Duke’s athletic department offers a “unique opportunity to gain hands-on experience in the daily operations of a Division I athletic department, including in-season and off-season” while seeking four-year degree recipients willing to work standard 9-to-5 office hours, plus some nights and weekends.

For their sweat and toil, Duke will reward these candidates by offering this position “UNPAID” (caps theirs) even though, as Deadspin noted, the university’s athletic budget was disclosed to be $91.7 million in a 2015 report. An email seeking comment from the Assistant Director of Athletic Facilities at Duke, Jeremy Anderson, whom applicants are told to contact, was not immediately returned.

A search for the word “unpaid” on the NCAA’s job market site turns up three internships that offer either an “allowance” or “stipend” and one other seemingly completely unpaid gig, a communications internship in the athletic development office at Wake Forest that prefers its candidates to have a master’s degree.

A 2013 Pro Publica story tracked some other unpaid internships in university athletic departments, while noting that the federal government gives non-profits—such as universities—more latitude in defining the gigs, which otherwise are legal only if they “must not replace paid positions and must also offer significant educational benefits.” The Duke job listing does not cite the word “internship” but perhaps it is being classified as such given its boast of candidates receiving such great “experience,” that buzzword touted by every internship in the history of mankind.

There, of course, seems to be little shortage of cash in most major athletic programs. Just this week, the Virginian-Pilot reported that Liberty, an evangelical Christian university in Lynchburg, Va. with a $1 billion endowment, has induced Old Dominion to visit for its 2018 home football opener with a $1.32 million payout. Liberty will be transitioning to the Football Bowl Subdivision (née Division I-A) that fall. Its new athletic director, Ian McCaw—whom you may remember for his tenure at Baylor where he was alleged to have taken no action amidst a sexual assault crisis—told the newspaper that Liberty is receiving a comparable amount from a Power 5 conference school that season, essentially nullifying the expense.

Still, as the story noted, the largest known payout for the 2016 season was the $1.3 million Western Kentucky received to play at Alabama. To paraphrase an old quote: We’ve seen Alabama play. We know Alabama. Alabama is a national powerhouse. Liberty, you’re no Alabama.

Speaking of the Crimson Tide, in fact, Alabama head football coach Nick Saban is scheduled to earn $11.125 million next year as part of an eight-year, $65-million extension, plus annual incentives up to $700,000. That’s not even the most eye-popping number in this USA Today report about his coaching staff’s salaries. Tosh Lupoi is his outside linebackers coach and co-defensive coordinator making $950,000 per year. There’s also a full-titled defensive coordinator, Jeremy Pruitt, who will earn $1.3 million, but as Deadspin and others have noted, Lupoi’s primary gift is as a world-class recruiter. Still, it’s worth noting that he will make more than the school’s athletic director, Greg Byrne, whom the Associated Press says will make $900,000 per year. Bama’s nine on-field football assistant coaches will haul in just shy of $6 million next season.

The Liberty and Alabama examples may be recent outliers illustrating just how flush some athletic departments are with money, but revenues are growing all over (except to the players). A December 2015 story in the Washington Post reported that college sports revenue almost doubled in a decade, and the newspaper’s review of 48 schools in the Power 5 conferences discovered that non-coaching payrolls rose nearly 70 percent, from $454 million to $767 million, in 10 years’ time.