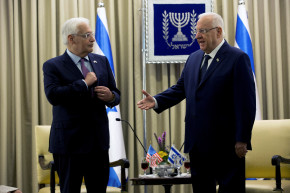 Trump’s Leak Of Israeli Intel To Russians Could Damage Ties

US Ambassador to Israel and David Friedman Israeli President Rivlin — REUTERS
By Shira Rubin
May 16, 2017 at 6:26 AM ET

Israel is stunned following a bombshell report in the New York Times that said President Donald Trump had revealed Israeli espionage secrets to the Russians last week in a move that, if confirmed, could endanger the American war on terror abroad as well as one of America’s most critical alliances in the Middle East.

Israeli officials have not responded to the allegation, but it was widely published in the Israeli press.

The intelligence was reportedly given up during a meeting with Russian Foreign Minister Sergey Lavrov and the Russian ambassador in the Oval Office last week, current and former American government officials told the Washington Post. It seems that Trump spontaneously blurted out, “I get great intel. I have people brief me on great intel every day,” without taking into account moves to increase U.S. leverage against the Russians, who hold opposing interests in the war in Syria.

Since Trump took office in January, Israeli intelligence officials have been re-assessing their intelligence sharing strategies, worried that any information passed on to Trump could be leaked to Russia and onward to Iran, which backs its proxy Hezbollah in Lebanon. Hezbollah’s leader Hassan Nasrallah said earlier this month that Damascus, Moscow, Tehran and Hezbollah were “in more harmony politically and militarily than at any time.”

In closed-door meetings, American intelligence officials “warned” their Israeli counterparts about sharing classified information to Trump, given the president’s suspicious relationship with Russia, according to a report by Ronen Bergman in the Israeli daily Yediot Ahronot.

“American officials have said that they believe the Kremlin to have ‘leverages of pressure’ over Trump,” wrote Bergman, who added that U.S.-Israel intelligence cooperation has been increasing over the past decade, targeting Iran and, in some cases, Hezbollah in Lebanon and Hamas in Gaza.

“If Israel’s secrets are not secure in the hands of the American spy agencies, that would cause a very serious danger to the security of the state of Israel,” he wrote.

“Some within the [Israeli] government are very concerned by the signs coming out from Washington: that there’s not exactly a shift in regards to Israel and the region, but there are certainly unexpected signs which are very different from what we expected” from Trump the candidate, said Oded Eran, a former Israeli ambassador to Jordan and fellow at the Institute for National Security Studies in Tel Aviv. As of Tuesday afternoon, before the New York Times story broke, he said that Israel still sees the U.S. as a critical security ally with which it pursues cooperation, but that it has also been developing security agreements with India and other Asian countries.

Constitutional law scholar Alan Dershowitz said in an interview on MSNBC that Trump did not break the law in revealing the information to the Russians, since the president is authorized to declassify government secrets as he sees fit, and so the allegations would not be grounds for impeachment. But if the Washington Post report is confirmed, the act would be even more serious than the crimes usually under debate in discussions of impeachment, he said.

Trump’s leak to the Russians “could compromise sources and methods and also result in a cutoff of information from American allies to the United States, as the result of which we would all suffer and be in danger,” said Dershowitz.

The White House press team has not answered any questions regarding the revelation, besides saying that “this story is false. The president only discussed the common threats that both countries faced,” Deputy National Security Adviser Dina Powell said on Monday night in an official statement.

The latest chapter in the Russia saga comes as Trump faces rising pressure on the question of his campaign’s possible collusion with the Russian government. Trump’s abrupt dismissal of FBI director James Comey has not halted the FBI investigation into the issue, which the issuing of grand jury subpoenas indicate is charging forward into the next, more serious phases. The Washington Post or other news organizations may also release further details, which are being withheld on the request of officials who said that their secrecy was needed to protect American intelligence capabilities.

The dramatic is also overshadowing Trump’s first international visit to Saudi Arabia, Israel, and the Vatican.

In Israel, chaos is already reigning, after a U.S. official on Monday told his Israeli counterparts that the Western Wall, a holy site in Jerusalem, is “not your territory.” Trump’s Middle East envoy Jason Greenblatt, who landed in Israel on Monday, has reportedly advised the Israelis to “refrain from getting into confrontations with the president and to help him implement his Middle Eastern policies.”