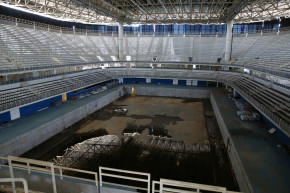 How The Olympics Hurt Rio’s Sex Workers
By Robert Silverman

Rio's Aquatics Stadium sits in disrepair just months after the games — REUTERS
By Robert Silverman
May 15, 2017 at 2:07 PM ET

Yet another demographic is claiming that the 2016 Summer Olympics in Rio de Janeiro, an event marred by profligate spending and an ongoing corruption scandal which hit Rio’s poorest and most vulnerable citizens the hardest, failed on its promise of an economic boom: sex workers.

Dr. Amanda De Lisio, a post-doctoral research assistant at Bournemouth University in England, and Dr. Michael Silk, a professor of sport and social sciences at Bournmouth, spoke with the brothel owner and sex workers at “The Rose Without Thorn,” a house of prostitution located in the city’s downtown red light district, nestled in between luxury apartments and office complexes. They revealed that a hoped-for “bumper season” in conjunction with the Olympics never occurred.

Sex work exists in a legal gray area in Brazil. While individual sex workers are recognized by the Brazilian Ministry of Labor and Employment and can receive benefits, the brothels and massage parlors, and their operators, the madams and pimps, fall outside the law. As such, sex workers depend on law enforcement officials looking the other way or going on the take. That wasn’t possible during the 2016 Olympics, given the increase in both military and civilian police officers that flooded the city and the campaign fronted by President Michel Temer which promised to crack dow on both workers and sex tourists. Even if Brazil was not mired in a brutal, ongoing recession, it’s not surprising that very few establishments were able to turn a profit.

The Rose Without A Thorn’s manager, Pedro, (who was granted anonymity) is no longer laboring under the delusion that a mega-sporting event would be the cure to his industry’s and his country’s ills:

Listen, it is an illusion that FIFA or the Olympics are good for business. This is a myth. Some of the biggest [sex-related] businesses in Ipanema went bankrupt during the games. And now it is worse. The economy is a mess, so too is the government. And it all started around the games. The Olympics did not improve the situation. It only furthered the fall.

But sex workers in Brazil had a recent historical precedent, one that they evidently ignored. During the 2014 World Cup in Brazil, the amount of sex work declined, despite the promise of thousands of potential clients flooding the city. Instead, sex workers “reported increases in violence and robbery,” and/or were shut down by a police force empowered to “clean up” the various host cities.

Brazil isn’t the only nation that has fallen for this myth. A 2011 study by the Global Alliance Against Traffic In Women found that mega-sporting events, including the Super Bowl, the World Cup, and the Olympics, have little to no impact on the host city’s sex trade. There is often a dramatic uptick in arrests, but that’s a function of the increased police presence and high-profile busts, not demand. Regardless, anti-sex work activists routinely use these events as a chance to stoke the local population’s fears, as do politicians eager to score cheap political points, claiming that their vigilance and commitment to law and order is the only thing keeping a municipality from being plunged into a den of vice and iniquity.

Both Snopes and Politifact have shot down claims like those made by Senator John Cornyn, who claimed s that “the Super Bowl actually [has] one of the highest levels of human sex trafficking activity of any event in the country.” (It doesn’t.) In a presser prior to the 2014 Super Bowl in New Jersey, Cindy McCain, the wife of Senator John McCain, said the Super Bowl represented “the largest human-trafficking event on the planet.” That statement was soon debunked in a study conducted by the McCain Institute for International Leadership at Arizona State University, a think tank named after her husband which lists Ms. McCain as a member of its human trafficking advisory council.

Even if U.S. politicians keep hammering away at this proven falsehood, Brazil’s sex workers seem to have wised up. Hopefully once and for all.