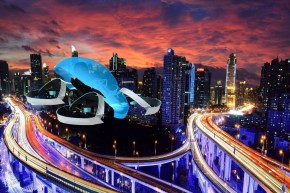 Toyota Wants Flying Cars At The 2020 Olympics
By Alejandro Alba

We’ve witnessed a lot of crazy aerial moments at the Olympics, from a jetpack at the 1984 games in Los Angeles, to an army of flying Mary Poppins fighting a 40-foot Voldemort and Queen Elizabeth parachuting in London in 2012.

Now, Toyota hopes to top them all in 2020, with commercial flying cars zipping around the city.

Toyota announced that it’s jumping aboard the flying-car craze with a drone-like vehicle that soars 33 feet above ground and can reach speeds up to 62mph. The “Skydrive,” developed by startup Cartivator, is expected to be flying by the end of 2018 and hopefully commercially available in time for the 2020 Tokyo Olympics, according to Nikkei. It’s still unclear how the company plans on using the car, whether at the games themselves or perhaps for transportation around the city to attract more tourists.

The Skydrive is a 9.5-foot electric vehicle with four propellers, which Cartivator is claiming as the “world-smallest flying car.” A prototype design has already been created and it looks like something out of “The Fifth Element” or “Cloud Atlas.”

Toyota is not the first company to promise a commercial flying car within the next three years. Kitty Hawk, the startup backed by Google’s co-founder Larry Page, announced last month that it’s flying car will be available for purchase by the end of 2017. Uber has also been working on flying cars and plans to test its flying taxi service by 2020.