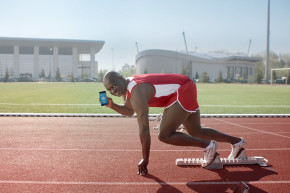 App Ad Jokes About How Great Doping Is, Enrages Everyone
By Joe Lemire

App Ad Jokes About How Great Doping Is, Enrages Everyone

Despite the backlash, the cheesy ad seems less to glorify sports drug use than to mock it

The Australian gambling agency Sportsbet recently unveiled a new advertisement for its Android app with spokesman Ben Johnson, introduced as the “1988 Games 100m Gold Medalist*” with subsequent disclaimer “*For 48 hours.” It shows an office with a framed medal ribbon conspicuously lacking a medal. The narrator hails Johnson’s credentials by saying, “When it comes to performance enhancement, Ben really knows his stuff.”

Johnson, a Jamaican-born Canadian sprinter, infamously won the 100 meters at the 1988 Olympics while setting an apparent world record with a time of 9.79 seconds. Within a couple days, however, his doping sample showed evidence of stanozolol, an anabolic steroid. Johnson admitted to doping, claiming it was necessary to keep up with the competition. In fact, that medal heat is often called the “Dirtiest Race in History” as six of the eight finalists either failed a drug test or were otherwise linked to performance-enhancing substances.

The ad is self-deprecatingly campy and kind of funny — its tagline is that this app “puts the ‘roid in Android.” The narrator explains that the app is powered by “scientific stuff injected into his back end.” Johnson boasts, “It tested positive for speed and power, again and again,” and said it’s “faster if you cut a few corners.” There are also other typecast figures promoting the app: a yellow jersey-wearing cyclist (think Lance Armstrong), a muscle-bound Chinese swimmer, and an Eastern European-appearing weightlifter.

Naturally, this commercial’s use of doping puns is causing an uproar in Australia. The country’s anti-doping chief, Judy Lind, released a statement saying, “This advert makes light of the use of performance enhancing drugs in sport and sends the completely wrong message that the use of drugs in sport is normal. This advertising campaign belittles the achievements of clean athletes and denigrates those who work to protect clean sport across the world.” Australia’s sports minister, Greg Hunt, called the ad “utterly unacceptable” and is seeking to have the 90-second spot banned from TV.

A senator, Nick Xenophon, told Reuters, “It is just wrong on so many levels — glorifying a drug cheat, tying it in with gambling and promoting it to kids in a lighthearted way.”

Sportsbet has no plans to remove the ad, with spokesman Will Byrne telling the Herald Sun that they’ve received “overwhelmingly positive support from the public and they see it for what it is, a tongue in cheek joke.” PR manager Christian Jantzen told HuffPost Australia, “We make no apologies for injecting some humor into advertising.” See, another joke. This is the same company who made a prior ad wondering what would happen if hipsters took over the Australian rules football league, with all the requisite facial hair, specialty caffeine, and counter-culture popularity jokes.

Sports betting is legal in Australia — and reportedly adds $5 billion annually to government coffers in taxes — but legislation at least bars its advertisements from airing before 8:30 p.m., a move to keep children away from being overly inundated with the commercials. Viral ads like this Sportsbet spoof with Johnson, however, is still going to be widely disseminated online. Herald Sun columnist Susie O’Brien wisely dismisses the concerns about any alleged glorification of steroids but points out the real issue:

“However, the fact that we can laugh about it shows how far we have come in addressing the scourge of drugs in sport. The clear message is that drug cheats are a joke; they’re not worthy of being taken seriously in sport.

I am much more worried about the fact that Johnson is advertising a sports betting app than the daggy line-up of innuendos from him and his cronies.

I personally hate all sports betting, but particularly ads which are designed to appeal to children, like this one.”

She goes on to note how inextricably linked gambling is from national sports — the rugby league tabbed Sportsbet its “official wagering partner” while the football circuit has a $10 million per year sponsorship with competitor CrownBet — and that the proliferation of online betting sites opens up gambling to children as young as 12.

If anything, that’s the real issue. There’s no need to be up in arms about a corny ad. Johnson profiting off his lapse is akin to disgraced retired ballplayer Pete Rose, who’s been barred from the Hall of Fame for his gambling, pocketing some coin by autographing, “Sorry I bet on baseball.” One can’t help but watch the ad and feel sad for Johnson; it’s hard to imagine this will spur any child to want to take drugs, excel athletically, and then become the knowing butt of a joke. But the ad’s possible appeal to youngsters? That’s something to be wary about.