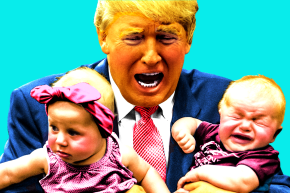 A new study shows just how unaffordable child care is in the U.S., and just how little the president's policies will help

The typical American family spends 15 percent of its income on child care — and President Donald Trump will do little to change this “affordability crisis,” according to a new report by the U.S. Congress Joint Economic Committee. “Unfortunately, too many families currently cannot afford high-quality child care, and the Trump administration’s policies will not help these families,” the authors write.

The report, titled, “The State Of Child Care In America,” paints a bleak picture of the financial costs of parenting across the U.S. It’s typical for a family to spend 15 percent of its income on child care — but families in some states, like New York and California, pay more than 20 percent of median family incomes. Things are even bleaker for solo parents: In states like Pennsylvania and Colorado, women pay nearly 50 percent of median single mother incomes for child care.

While Trump has promised to introduce tax deductions and refundable tax credits for child care costs, the report finds that these changes would — surprise! — “mostly benefit high‐income families, while providing little relief for low‐ and middle‐income families.” The average tax cut for a family earning less than $30,000 would be a piddly $10. A one-child family making $500,000 in Ohio, on the other hand, would get almost $2,500 in tax benefits. As the report points out, this is more than three times as much as a family earning minimum wage in the state.

As the report lays out, affordable child care increases women’s employment opportunities, educational achievement, and earnings. It also leads to children with better health and educational achievement, higher future employment rates and earnings, and a lower risk of juvenile arrests. Which is a long-winded way of saying, as the study does, that “investments in high-quality child care are critical to the educational and economic success of mothers and children, as well as the next generation and society at large.”

Just don’t expect Trump’s child care plan to do anything about it.