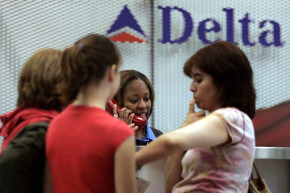 A blanket ban on carry-on laptops for international flights may be coming. But it's not today.

Delta airlines has apologized for accidentally announcing to passengers that a laptop ban on flights entering the U.S. from Europe, reported to potentially be on the way, had already taken effect.

It has not, the Department of Homeland Security, the agency that would enact such a policy, told Vocativ.

That’s not to say that such a policy — in which all airplane passengers from locations in Europe and possibly other countries to the U.S. will be forced to check their computers — isn’t coming. The DHS reiterated its earlier statement to Vocativ Friday: “No decisions have been made on expanding the restriction on large electronic devices in aircraft cabins; however, it is under consideration.”

That kind of policy is already in effect for some countries. In March, the DHS suddenly banned all large electronics from being carried any U.S.-bound flight from eight countries in the Middle East and Africa.

An unknown Delta employee at Cincinnati/Northern Kentucky International Airport printed up and posted signs that read “Effective May 12, passengers will only be permitted to carry a cell phone onboard flights returning to the United States. All other personal electronic devices will be required to be checked.” The signs were printed on official Delta letterhead and went viral on Twitter Friday.

The sign reflected a belief that an upcoming DHS ban against carry-on laptops wouldn’t just be for flights from Europe, but would be extended to include all international flights to the U.S.

“That sign was posted in error and should be regarded as erroneous,” a Delta spokesperson told Vocativ.

The spokesperson declined to go on the record about further details, like why that Delta employee thought May 12 would be the start date of such a ban, or why it would seem to include any flight from around the world.

The previous DHS ban, though sudden, still gave airports a 96 hour notice that they should begin forcing all international travelers to check their laptops.

“When there are changes, we’ll announce that,” a DHS spokesperson told Vocativ. “There is no announcement today, contrary to some published reports.”