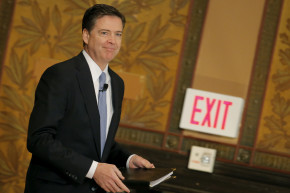 President Donald Trump's surprise move may have dominated the news cycle, but there was other important news

Since it was announced on Tuesday that President Donald Trump had fired former FBI Director James Comey in the midst of his ongoing Russia investigation, the U.S., and the world, have been absorbed in the story. But Comey’s dismissal wasn’t the only thing that happened in what was a tumultuous week.

Here’s a sampling of some of the week’s biggest stories that may have been overshadowed by Trump, Comey and maybe even their dinner date.

Sessions, known for his more draconian approach to criminal justice, announced Friday that he is doing away with a policy initiated by former Attorney General Eric Holder that essentially permitted judges to dole out lower sentences to those accused of low-level drug crimes.

“It is a core principle that prosecutors should charge and pursue the most serious, readily provable offense,” Sessions wrote in a memo this week. “This policy affirms our responsibility to enforce the law, is moral and just, and produces consistency.”

Despite touting his “massive landslide” victory in the 2016 election, Trump has consistently claimed that the contest was plagued by voter fraud. Even though his claims remain baseless, Trump signed an executive order on Thursday to create a commission designed to investigate alleged fraud in the country’s electoral system.

Vice President Mike Pence and Kansas Secretary of State Kris Kobach will be chair and vice chair, respectively, of the bipartisan Presidential Commission on Election Integrity.

But Kobach has a checkered record when it comes to voting rights. Kobach, who has supported Trump’s suspect claims that 3 million to 5 million people voted illegally in 2016, is known for his anti-immigrant agenda and attempting to disenfranchise thousands in Kansas. He’s also been sued four times by the American Civil Liberties Union for voter suppression, with the ACLU claiming victory in each case.

Even though the conflict in Afghanistan has spanned three presidents and 15 years, the Trump administration is looking into increasing troop numbers in the embattled Central Asian republic.

According to the Washington Post, the president’s advisers recommended he deploy 3,000 to 5,000 additional U.S. troops to Afghanistan to fight a rising Taliban. This is a recommendation that would do away with the Obama administration’s policy to decrease America’s role in Afghanistan.

Trump’s travel ban is back in court

Another judge in Washington, D.C., on Thursday weighed in on the updated version of Trump’s infamous “Muslim ban,” saying that she was “inclined to agree” that it was probably unconstitutional. The executive order prohibits travel and refugees from six Muslim-majority countries and has been blocked by judges in Maryland and Hawaii.

However, judges in the 4th Circuit and 9th Circuit appeals courts are hearing arguments, both in favor and against, allowing the order to be put in action next week. The judges are likely to uphold other rulings that Trump’s order is unconstitutional, which could mean the case will eventually be heard by the Supreme Court.

John H. Thompson, the director of the Census Bureau, abruptly resigned this week.

Thompson’s departure comes as the bureau faces funding shortages for the 2020 count of the U.S. population. But the issues at stake go beyond just how many people live in the U.S. The census influences how congressional districts are formed, and it’s essential for ensuring that minorities get fair electoral representation.