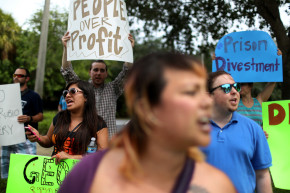 Attorney General Jeff Sessions has ordered federal prosecutors to seek the harshest possible penalties for drug-related offenses, a move that should make the private prison industry that relies on those offenders very happy.

The new policy, which was outlined in a memo released on Friday, will effectively reverse the Justice Department’s “Smart on Crime” policy during the Obama administration, which sought to shorten sentences for minor, nonviolent drug offenders in an effort to reduce the prison population.

The United States has the highest incarceration rate in the world, with about half of the inmates in federal prisons incarcerated drug offenses. Many of them are serving mandatory minimum sentences that were created during the course of America’s war on drugs. In the memo, Sessions, who said in March that there was “too much of a tolerance for drug use,” called for prosecutors to charge offenders with the “most serious, readily provable offense,” deviating only in special circumstances and with the approval of a U.S. attorney general or assistant attorney general.

“This policy affirms our responsibility to enforce the law, is moral and just, and produces consistency,” Sessions wrote. “Any inconsistent previous policy of the Department of Justice relating to these matters is rescinded, effective today.”

The Obama administration’s effort to get drug offenders out of jail would have meant less money for the controversial private prison industry that houses many of them. But Sessions’ memo was exactly what many opponents of mandatory minimum sentences feared ─ and what advocates for the prison prison industry have been waiting for since Trump took office. The $4.8 billion industry has spent millions of dollars lobbying for laws that call for harsher sentences for offenders and against legislation that would reduce them. USA Today found that two of the largest for-profit prison operators in the country, GEO Group and CoreCivic, each donated $250,000 to Trump’s inaugural fund, with the former also giving $225,000 to a Trump super PAC. As the American Civil Liberties Union noted in January, GEO Group hired two of Sessions’ former aides as federal lobbyists.

“[T]he private prison industry stands to gain tremendously if he is confirmed as attorney general,” the ACLU said.

Both companies’ stocks plummeted after former Deputy Attorney General Sally Yates announced last August that the Justice Department was planning to phase out its use of private prisons. Once the new administration took office, Sessions rescinded that memo in February. The two for-profit prison operators in question have also seen their stocks spike. On Nov. 7, 2016, a day before Trump won the presidential election, GEO Group’s stock was worth $10.61 a share and CoreCivic’s was at $14.19. As of Thursday, they were worth $32.10 and $32.81, respectively.