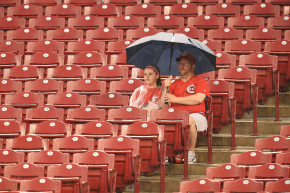 Cincinnati Is Broke Thanks To Sports Stadiums
By Robert Silverman

Cincinnati Is Broke Thanks To Sports Stadiums

It seems this scam has consequences

The Duke Energy Convention Center, whose naming rights are owned by the fine folks who spilled millions of gallons of toxic coal ash containing carcinogens into the Dan River in North Carolina and only paid a $100,000 fine, is in need of major renovations. According to the Mike Laatsch, the CEO of the Cincinnati Convention and Visitors Bureau, business is plummeting, and without these upgrades, they’ll lose out on 100,000 room nights by 2022.

Naturally, he would like to see taxpayers pay for this. Somehow. Laatsch hasn’t said how much should be paid or exactly what part of the public sector should be ripped off, but what he fails to mention is that the Duke Energy Convention Center was upgraded as recently as 2006 at a total cost of $135 million, with some nice hotel tax breaks thrown in, and netted $9 million for the aforementioned naming rights. But as Professor Heywood Saunders, the author of “Convention Center Follies,” notes, the renovations didn’t come close to achieving the desired result, not with nearby Cleveland, Indianapolis, and Columbus rolling out new venues of their own and/or paying for expansion projects to existing sites.

And while various Cincinnati hospitality and tourism experts – the industries that will benefit most from a still-undetermined handout of free taxpayer dollars – are saying this absolutely has to happen, while throwing around terms like “creative financing” to avoid any unpleasant questions about who will pay for this, there’s one major sticking point: Cincinnati and Hamilton County have been as yoked by stadium scams as any municipality in the country.

Forty-five percent of Cincinnati children live below the Federal poverty level and as of 2011, Hamilton County was devoting 16.4 percent of its total annual budget to debt service repayments, thanks to the $1 billion in bonds that were created at the beginning of the century to finance the construction of the new Paul Brown Stadium, home to the Cincinnati Bengals, and Great American Ballpark, which houses the Cincinnati Reds.

In order to keep up with the payments, social services were and are still being slashed, with one public official calling the deals struck by Hamilton County, “The monster that ate the public sector.” When the Bengals requested a new scoreboard in 2014, Hamilton County had no choice but to cough up an additional $7.5 million, thanks to a “state-of-the-art” clause in the lease agreement which requires that whenever any other NFL team blows a wad of dough on expensive bells and whistles (or invokes its own state-of-the-art clause), the Bengals have to keep up with the football Joneses and the county is on the hook. Forever.

Even if the Duke Convention Center could make the case that a financially-strapped county should devote a slice of its dwindling and meager public dollars to them, it’s not the only venue coming around hat in hand.

In April, the NCAA announced that U.S. Bank Arena had been selected to host the first two rounds of both the Men’s and Women’s National Basketball Championship games for the 2021-22 season, as long as Hamilton County agreed to spend up to $350 million to rebuild the arena, an undisclosed chunk of which would be paid in some form by taxpayers. Without that, the NCAA will pack up its toys and select some other nice city, one with a spiffier, newer arena.

But for two years now, the Nederlander Organization and AEG, which own and maintain operations of U.S. Bank Arena, have been begging for public cash as part of a $200 million renovation, and now they’ve seized upon the NCAA’s dangled carrot as an opportunity to put the squeeze on the local pols. For the moment, no one holding public office is falling for it. One GOP county commissioner said, “We already own two stadiums. We are full-up on stadiums,” and a Democrat commissioner told the Nederlanders and AEG, “Go do it. It’s your arena. We’ll be happy to help with permits and zoning, but don’t think that the county has a pot of money over here that we’re waiting to make available.”

That’s quite the understatement.