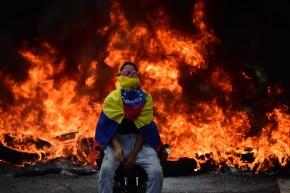 As Venezuela's economic crisis claims more lives, Venezuelan and other Latin-American baseball stars are speaking out

The news and images emerging from Venezuela are nothing short of heartbreaking, as its citizens are starving while the country suffers through the world’s most devastating ongoing economic crisis. President Nicolás Maduro is now trying to re-write the constitution to keep himself in power.

As Royals shortstop Alcides Escobar said, what they want is a “free and prospering country,” and they are willing to speak out no matter the dangers they face.

Re #Venezuela #protests readers ask why #MLB players don't speak out more…The fear of reprisals is very real for friends & family back home.

Pirates catcher Francisco Cervelli organized a 13-player video trying to raise awareness of the crisis in their home country. In that video, Cervelli says, “We’re not speaking as players but as citizens who love their country.” The other players all take turns saying that they want to stop the oppression and that they seek peace and liberty in Venezuela.

He also posted an Instagram photo of someone in a Guy Fawkes mask asking, “Can we now call it a dictatorship or not yet?” He also wore eye black for a recent game with “SOS” under one eye and “Venezuela” under the other.

For years Major League Baseball has recognized that conducting its scouting and player development work in Venezuela was already dangerous. The majority of clubs have closed their academies in the country, and now the league is sponsoring at least three showcases for Venezuelan players to be held outside the country while also staffing a workout facility in the country with security. That’s according to a release from MLB’s senior vice president Kim Ng, who oversees international efforts, that was posted on twitter by Arturo Maracano of ESPN Deportes. https://twitter.com/arturomarcano/status/860268717548163072 Players from other countries, such as the Dodgers’ Cuban outfielder Yasiel Puig, have similarly taken to social media to voice solidarity.

“We are with you, my Venezuela,” Puig wrote in Spanish. “Keep fighting and soon the abuse will end and the people responsible will pay God bless all of you.” He added the hashtag #puigyourfriend.

Cervelli and Escobar have been particularly outspoken. Cervelli posted this video of Maduro dancing on national television while protests take the streets. “It makes me sick,” he wrote. Escobar told La Vida Baseball, “We need a change in government. Elections. Because after 17-18 years with the same government, we haven’t improved. Regrettably, what we need is a change in government.”

“No, I’m not afraid,” he added. “I don’t hide my opinions because I’m feeling everything that is happening. It hurts. I was born, raised, grew up in Venezuela. What I’m really doing with my social media is supporting [the people]. People are really bad off. I’m not posting things against anyone in particular, but [saying] that Venezuela deserves a change.”