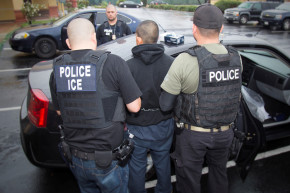 Two-Thirds Of Arrests From ICE Roundup Are Legal US Citizens

ICE spent six weeks rounding up alleged gang members across the country. Of the 1,378 people busted, 933 are U.S. citizens.

President Donald Trump ran on a platform that included rounding up all the “bad hombres” in the U.S. illegally, who he infamously categorized as rapists, murderers and gangbangers, and booting them back across the border. In the course of about six weeks, Immigration and Customs Enforcement apprehended nearly 1,400 people who allegedly fit at least one of the president’s descriptions, the agency announced Thursday. Unfortunately for Trump, more than two-thirds of those arrests won’t be deported. The reason: they are U.S. citizens.

“Project New Dawn,” a part of ICE’s “Operation Community Shield” program that targeted street gangs between March 26 and May 6, led to the arrests of 1,378 people nationwide who authorities say are involved in “transnational criminal activity, including drug trafficking, weapons smuggling, human smuggling and sex trafficking, murder and racketeering.” Of those arrested, 933 are U.S. citizens. The other 445 people arrested during the program are from 21 different countries. Of those 445, 280 were arrested on administrative immigration violations, meaning their only known crime was being in the country illegally. So out of 1,378 alleged gangbangers busted during the roundup, 165 were illegal immigrants who committed crimes beyond standing on the wrong side of the border.

“Gangs threaten the safety of our communities, not just in major metropolitan areas but in our suburbs and rural areas, too,” acting ICE Director Thomas Homan said. “Gang-related violence and criminal activity present an ongoing challenge for law enforcement everywhere. Our efforts to dismantle gangs are much more effective in areas where partnership with local law enforcement is strongest.”

According to ICE, 1,095 of those arrested were confirmed gang members from gangs like the Bloods, Crips, MS-13 and the Surenos. Crips and Bloods, traditionally black, non-immigrant street gangs, combined for 241 busts, while Hispanic gangs like MS-13 and Surenos had 222 of their members scooped up in the haul. None of the remaining 283 arrests claimed a gang affiliation, ICE said, but they ended up being arrested on “either criminal or administrative charges.”

In addition to the alleged gangsters, ICE and its partnering law enforcement agencies seized 238 fire arms, more than $491,000 in cash and a lot of drugs, including 790 ounces of cocaine, 546 ounces of methamphetamine, 113 ounces of heroin and more than an ounce of fentanyl, a powerful synthetic opioid often mixed with heroin to make it more potent.