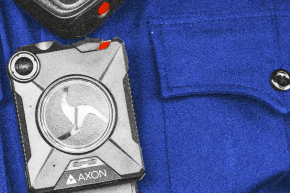 Fearing for their clients, defense attorneys are refusing to hit 'agree' to access the company's cloud-based body cam footage

Taser International, the police tech company that recently re-branded as Axon, has aggressively pushed its body-worn cameras — and corresponding cloud storage service for evidence — into police departments across the U.S.

But defense lawyers say that the company’s control over these massive archives of footage forced them to agree to broad terms and conditions before they can access the evidence against their client, potentially endangering their clients’ right to a fair trial.

Earlier this week, California-based criminal defense attorney Rick Horowitz posted a copy of a user agreement he says he was asked to sign before accessing Axon’s online video evidence locker, Evidence.com. He refused, noting that the agreement required him to allow the company and its employees “access and use of the Account Content,” including video evidence and other privileged information.

Specifically, the agreement would grant Axon “a non-exclusive, transferable, irrevocable, royalty-free, sub-licensable, worldwide license” to use any intellectual property that a user places “on or in connection with the Services.” Complicating the matter even more, Horowitz’s client in this case is a juvenile defendant, and no corporation — Axon included — has a legal right to store or disseminate juvenile records under California state law. More broadly, as TechDirt notes, Axon’s agreement effectively requires users to sign away some of their legal rights in exchange for receiving public records.

That doesn’t sit well with defense lawyers, whose jobs depend on their ability to guarantee clients that case information will be kept confidential, without interference or tampering by a third party. While the language is fairly standard for a conventional software license agreement, they argue Axon has no place imposing those restrictions on evidence in a criminal case.

“It’s not just that Axon’s terms contain language that would make certain defense actions difficult — it’s that there’s language wholly inappropriate for evidence to be used in a criminal case,” Fred Jennings, an attorney with the digital rights-focused law firm Tor Ekeland, P.C., told Vocativ. “Agreeing to its terms would put a criminal defense attorney in direct conflict with their ethical and professional obligations.”

For example, several sections of the agreement posted by Horowitz would allow Axon to erase data or terminate access at any time and for any reason, which would effectively mean giving a private corporation permission to destroy evidence in a criminal case. Even further, Jennings says the agreement gives Axon a “blanket waiver” of legal liability, which would make it difficult to pursue claims against the company if an employee ever did decide to delete or tamper with footage.

“This isn’t merely a fetter on defense counsel whose only route to this evidence is through Axon’s services. It’s a Faustian bargain that any defense counsel should refuse to sign without substantial modification,” said Jennings.

In the past, the company has claimed that all activity in its evidence locker system is automatically logged for transparency, arguing that the resulting audit trails prevents police and others from tampering with footage. But police transparency advocates have long warned that these measures will be useless if police and private companies like Axon are the ones who ultimately control access to the video evidence.

In Albuquerque, New Mexico, for instance, police have been accused of covering up the officer-involved killing of a 19 year old girl by deleting footage and refusing to disclose the logs from Evidence.com. The same department also allowed officers involved in shootings to delete body cam footage for three years.

After being contacted by Vocativ, Axon spokesperson Steve Tuttle said that the company has removed some of the data-sharing language from its Terms of Use agreement. But he nevertheless insisted that that provision was normal for a tech company, and merely reflected “standard boilerplate language contained in most third-party cloud computing contracts.”

“The provision applies solely to data containing intellectual property rights, and evidentiary data does not fall within this category,” Tuttle told Vocativ in an emailed statement. “Although the provision at issue is industry standard, out of an abundance of caution, Axon has removed it from its third-party Terms of Use.”

When asked for further clarification, Tuttle added that the language in question was only in effect for 15 days, and said that “Axon does not own, control or inspect evidence that is hosted on Evidence.com.”

But Horowitz, the defense lawyer who initially balked at Axon’s contract, scoffed at the modifications, saying that they still don’t address the deeper problem of giving a private corporation free access to data on people who haven’t been convicted of a crime. If the company is not under any court’s direct supervision, how can a suspect whose records were expunged be assured that Axon will delete records?

“Even if they change the user agreement, it really doesn’t address the underlying issue,” Horowitz told Vocativ. “The bottom line is, do we as a society want a private company having all this data about individuals who are charged with crimes?”

Update: May 13, 2017: This article was updated with a clarification from Axon regarding the length of time the clause was in effect