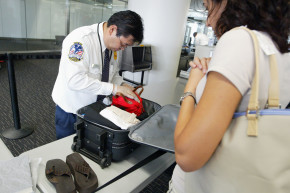 Here’s A Hint Of The Meltdown If U.S. Banned Laptops On Europe Flights
By Jeff Andrews

Here’s A Hint Of The Meltdown If U.S. Banned Laptops On Europe Flights

For a business traveler, long airline flights are often a chance to catch up on work emails, plan for long-term projects, or finally write that business proposal that’s been languishing on the back-burner. But if the Trump administration’s latest national security measure goes through, airline passengers will have only one option for passing the time on flights coming from Europe–read a boring ole book or watching whatever terrible movie the airline is showing.

The Department of Homeland Security is considering a ban laptops and other large electronic devices like tablets from the cabin of flights originating from Europe, a spokesman from the department said on Wednesday. If it goes ahead, these devices would have to be stowed in checked luggage, while cell phones would still be allowed as a carry-on, according to the New York Times.

Both the U.S. and U.K. had already banned large electronic devices from flights originating from 10 Muslim-majority nations in the Middle East and Africa after intelligence reportedly surfaced claiming that ISIS was developing a bomb that could be stored in laptops. A full European ban, or additional restrictions, would be an extension of the strategy to prevent this from happening.

While the earlier ban was met with somewhat tepid resistance, a ban on European flights would inconvenience thousands of air travelers a day, many of whom have expressed their outrage online. CNN reported that approximately 350 flights go from Europe to the U.S. every day, and that a laptop ban could hurt U.S. tourism, which has already suffered since Donald Trump was inaugurated.

The efficacy of a potential ban was also called into question by The Daily Beast, which cited 33 incidents reported by the FAA where electronic devices with lithium-ion batteries caused fires in the cabin. These fires were put out by airline staff, but if one happens in luggage that’s stowed away, no one will be down there to put out the fire.

Homeland Security secretary John Kelly was scheduled to brief senators on security matters Thursday, and approval of the ban could come shortly after, although there is no timetable for approval or for when it might take effect. Regardless, people who would be effected by the measure expressed their displeasure on Twitter yesterday after news of the proposal broke.

Potential laptop ban coming on flights in the US? Oh gosh. There goes travel productivity. Ugh.

This laptop ban is stupid.

Your laptop might be a bomb so let’s put it in an unmonitored part of the plane. That solves what exactly?

If DHS goes thru with their stupid ban on flights from Europe tomorrow, I won’t be allowed laptop, tablet, or headphones when I fly Friday

You are fucking kidding me about this stupid laptop/tablet ban. I fly out of the country in 3 weeks.

If the laptop flight ban happens, I say we all get loud typewriters. That'll turn things around quickly.

Well, a laptop ban on european flights is one way to ensure that all the tech conferences move to Canada.

tablet and #LaptopBan on trans-atlantic flights? this might spark the end of my travel. please lobby @AmericanAir @united

I don't know what's more painful. The idiotic laptop ban or how these guys don't see the obvious way to get around it.