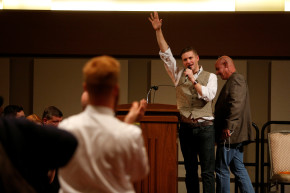 Squarespace is becoming the web platform of choice for the 'alt-right,' despite its acceptable use policy banning bigotry.

Last month, Vocativ wrote about how certain high-profile white supremacists and their organizations are using Squarespace as their, in the company’s own words, “all-in-one solution” to create “beautiful websites.” This has come despite Squarespace’s acceptable use policy that bans “advocat[ing] bigotry or hatred against any person or group based on their race, ethnicity, nationality, religion, gender, gender identity, sexual preference, age or disability.”

Several weeks later — and with a petition to the company of nearly 12,500 signatures calling for it to end its association with white supremacists — Squarespace has yet to follow its own policy or change that policy to allow such content. White supremacists or organizations that use Squarespace for their websites include Richard Spencer, the de-facto leader of the “alt-right” movement, and Identity Evropa, whose founder, Nathan Damigo, made the news after he was caught punching a woman on camera at a protest.

A Squarespace spokesperson told Vocativ in April that the company was “looking into the matter.” But multiple follow-up requests for an update on the status of that investigation sent over the last two weeks have gone unanswered.

When Vocativ first wrote about Squarespace, University of Massachusetts Boston Prof. Joseph Brown’s petition had 42 signatures. But word of the petition has blown up online, booming to 12,414 signatures as of Thursday afternoon.

“The public response has been incredible,” Brown told Vocativ.

Even with the spike in petition signatures, Squarespace remains quiet, especially on its Twitter account where the company is only responding to users who do not tweet about the issue.

The outcry over Squarespace’s clientele has spilled over to some of the platforms on which it advertises. Squarespace has become well-known for advertising on podcasts in an effort to reach younger potential clients whom make up a good portion of its core audience. At least one of those podcasts has reached out to its ad sellers about the matter.

“This issue concerned us,” Paul Scheer, co-host of “How Did This Get Made?” told Vocativ in an email. “We reached out to our ad sales team at Midroll, who took this concern VERY seriously. They reached out to Squarespace, and discussed our and their concerns.”

Brown said he’s also heard from people who said they canceled their Squarespace accounts due to the company hosting the websites of white supremacists.

But Brown has yet to receive any kind of response from Squarespace.

“It’s amazing to me that Squarespace has yet to respond to us at all,” Brown said. “They clearly know about the problem, because they get automatic updates on the petition’s signature account, sent to three different email addresses … Yet they’ve elected keep enabling white supremacists on the Internet. It’s baffling.”