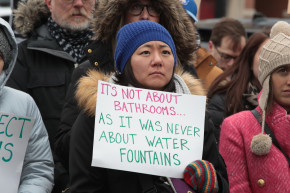 The Texas state senate passed a bill on Wednesday that will effectively bar all trans athletes from competing in high school sports. Senate Bill 2095, an onerous and deceptive piece of legislation which purports to ensure “the safety of competing students or the fairness of a particular competition,” was voted into law on Wednesday by a 22-8 margin, removing an exception in University Interscholastic League regulations which permitted the use of certain steroids by high school athletes if they had a valid medical reason.

Previously, the UIL did allow athletes to take steroids, like testosterone, as long as the medication is “dispensed, prescribed, delivered and administered by a medical practitioner for a valid medical purpose,” as is the case for a student who is transitioning. If there is any confusion as to why the legislation was introduced at all, it’s in response to this year’s 6A Region II state title which was won by Mack Beggs.

Beggs is a 17-year-old who is in the process of transitioning from female to male and, thanks to a previous 2016 UIL regulation which forces high school athletes to compete according to the gender on their birth certificate, took the mat against girls. As you’d expect, Beggs was subjected to a serious and ugly transphobic backlash throughout the tournament.

A recent lawsuit brought by the parent of a female wrestler who competed against Beggs challenged the UIL’s “safe harbor” medical exception in an attempt to void Beggs’s title and remove him from competition, arguing that by allowing him to wrestle at all his opponents were placed in “imminent threat of bodily harm.” (The lawsuit was dismissed in April, and the plaintiffs have given no indication that they planned to appeal.)

That thin gruel was mirrored by Republican state senator Bob Hall, the bill’s sponsor, who used similar language as the plaintiffs about “fairness” and “safety” to take a second bite of the apple. Via the Texas Tribune:

In defending the measure, Hall argued the legislation was not meant to automatically disqualify transgender athletes but instead give UIL the oversight authority to “protect the other students who are playing” from “unsafe situations.”

“This bill is not addressing who plays on what sports,” Hall said. “This bill is addressing individuals who … are taking steroids, then make sure, as a result of that, the events remain safe and fair.”

However, one Democratic state senator, Sylvia Garcia, wasn’t buying it. “The real intent of the bill is to keep young transgender athletes from participating in sports,” she told CNN prior to the bill’s passage. “We need to make sure they’re free to participate just like everybody else.” Garcia also failed in her attempt to attach an amendment which would have forced the UIL to abide by the NCAA rules regarding trans college athletes, which outlines in great detail how and why a trans athlete who takes the field with their cisgendered counterparts is not being given any kind of unfair advantage.

If you’re still not sure, or feel the need to whinge about political correctness run amok, read Katelyn Burns at Vice Sports about the actual impact of hormone therapy on trans athletes.

Oh, and on Wednesday, the Texas House of Representation passed a bill giving adoption agencies the right to slam the door shut to trans parents, gay parents, and even atheists if it they feel like it, because religion. It will still require approval by the state senate, but given the success of SB 2095, the bigots may win again.