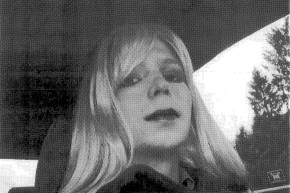 Chelsea Manning Prepares For Freedom In A Changed World

The whistleblower who put WikiLeaks on the map has made friends and allies during her 7 years in prison. What's next?

When Chelsea Manning is released from prison on May 17, the Iraq War whistleblower and former Army private will be able to be her authentic self in public for the first time.

Despite having the bulk of her 35-year sentence commuted as one of Barack Obama’s final acts in office, Manning, a 29 year-old transgender woman, will have still served 7 years behind bars for passing confidential Army information to Wikileaks. She was convicted of violating the Espionage Act for her leak, which included video of U.S. soldiers killing civilians in Baghdad. Her prison term is the longest of its kind in U.S. history.

But Manning’s friends, supporters, and fellow whistleblowers are optimistic that she will find her way in the world as a free woman, even if that world is dramatically different from the one she left behind.

“I watched the world change from inside prison walls and through the letters that I have received from veterans, trans young people, parents, politicians, and artists,” Manning wrote in her final public statement before being released from prison. “I hope to take the lessons that I have learned, the love that I have been given, and the hope that I have to work toward making life better for others.”

To her supporters, Manning’s release is a monumental relief. As a transgender woman assigned to an all-male military prison, she endured conditions widely condemned by human rights groups, including 11 months of solitary confinement. She was also kept from growing her hair, initially denied access to hormone therapy and sex-reassignment surgery for her gender transition, and threatened with further punishment after attempting suicide on two occasions.

But despite being sequestered away by an opaque military prison system, Manning managed to build relationships with people on the outside. Those who have spent time getting to know her during that time describe an empathetic young woman, full of energy and idealism that transcends her circumstances.

Evan Greer, a trans activist who serves as campaign director for the advocacy group Fight For The Future, says she has been contacting Chelsea by phone about once a week for the past several years.

“It’s a surreal feeling to have gotten to know someone so well. We’ve been through a lot together, but I’ve never been able to see her face or give her a hug,” Greer told Vocativ. “Right now it’s a big mix of excitement, trepidation, and waiting to see what comes next.”

Isis Agora Lovecruft, a cryptographer who befriended Manning over the phone after being put in touch by her lawyers, described to Vocativ how the whistleblower took up learning advanced cryptography while imprisoned at the disciplinary barracks in Fort Leavenworth, Kansas. By dictating code written on sheets of paper to her lawyers over the phone, Manning was able to implement an entire cryptosystem in a computer language called Sage, which Lovecruft then tested and reviewed for bugs.

“Chelsea’s code was well-written, and I was excited that she was not only persevering but studying post-quantum cryptography,” Lovecruft said. “But mostly I felt angry, and frankly a bit nauseous, at the injustices involved in requiring someone as brilliant as her to dictate code over the phone.”

Chase Strangio, a transgender human rights lawyer for the ACLU who worked on Manning’s case and now considers her a personal friend, credits Obama’s commutation in part to Manning’s efforts to remain visible and counter the narratives being made about her in the media — sharing her thoughts in columns for the Guardian and through her Twitter account, which she updated regularly by dictating tweets to her lawyers over the phone.

“All of these things were driven by Chelsea in an effort to keep herself alive and engaged,” he told Vocativ. “Those things were essential ultimately to her not only surviving but getting her sentence commuted, because we were able to keep her story alive in the public consciousness.”

But while Manning will soon gain her freedom, supporters say her fight is far from over. Once she leaves prison, she’ll lose access to the healthcare she received while incarcerated, including the hormone replacement medication used for her gender transition.

Manning also faces significant challenges as an ex-convict and a whistleblower adjusting to life in the U.S. under Donald Trump’s presidency — not to mention re-entering the world as a transgender woman at a time when trans rights are under attack. In his first four months in office, Trump has already signed executive orders rolling back anti-discrimination protections for transgender students instituted by Obama. And a bill to repeal the Affordable Care Act that recently passed in the House of Representatives would effectively make being transgender a “pre-existing condition” for which health insurance companies could deny coverage, if it passes as written in the Senate.

Still, Manning’s supporters are hopeful that she will have a good measure of support and protection thanks to her position as a public figure. Her supporters have already raised over $134,000 for a “welcome home” fund, managed by Manning’s older sister, Casey, which will help pay for her food, housing, medicine, and other essentials once she is released.

To allow her time to acclimate, her lawyers told Vocativ she won’t be doing any media appearances, apart from a few pre-arranged interviews.

“This is an amazing thing, but I think it’s important for us who are watching her and looking to her to remember she’s going to be experiencing a range of emotions as she tries to navigate a world that’s not familiar to her,” Strangio said.

Thomas Drake, a National Security Agency whistleblower who once also faced Espionage Act charges, has been an outspoken supporter. He too emphasized the need to give Manning ample space during this difficult period, but also encouraged her to use her position to pursue activism and continue to speak truth to power.

“She deserves the time to become herself now that she’s free,” Drake told Vocativ. “She has a unique opportunity to further the cause of justice on so many fronts. I think she’s uniquely positioned in terms of history, and she’ll be free to speak as a whistleblower, but also a person.”

Manning hasn’t announced any plans for what she will do next, or where she plans to live once released. But those close to her say she wants to continue to be a public advocate for civil rights and social justice issues, just as she has from behind bars.

That, to many of her supporters, is the greatest joy of Manning’s release: that she’ll finally be able to speak for herself, and have the world see her for who she truly is.

“Overall I’m just overjoyed that she will be able to share herself with the world,” said Greer. “Given the current political situation, the world needs people like Chelsea now more than ever.”

Update: This piece was updated to reflect that Manning will be doing a small number of pre-arranged media interviews following her release