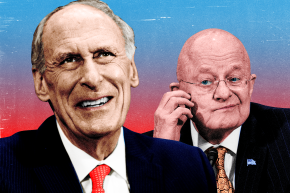 Even Trump's own appointees agree, though the president himself denies it

The highest-ranking intelligence official in Donald Trump’s administration disagrees with him: There’s no doubt that Russia was behind the series of hacks and leaks against Democrats that helped get Trump elected, he said.

In the first annual report to the Senate Intelligence Committee, Trump-appointed Dan Coats, the new Director of National Intelligence, declared Thursday that “only Russia’s senior-most officials could have authorized the 2016 U.S. election-focused data thefts and disclosures, based on the scope and sensitivity of the targets.”

That’s a direct contradiction of a curious stance Trump himself has largely maintained since before he was even elected: that it’s impossible to know the culprit of the Democratic hacks really was. Less than two weeks before the report, Trump reiterated that claim, this time indicating the culprit could have been China. He also claimed that “If you don’t catch a hacker, okay, in the act, it’s very hard to say who did the hacking,” a sentiment that cybersecurity professionals strongly disagree with.

Despite Trump’s denial, Coats’s assessment is consistent within the U.S. intelligence community’s own. The three largest intelligence agencies in the country, the National Security Agency, Central Intelligence Agency, and Federal Bureau of Investigation, announced that January that the hacks were ordered by the Russian government. That announcement echoed an even earlier statement, from October, coauthored by both the Office of the DNI and the Department of Homeland Security.

The report also states that Russia will continue to try to influence U.S. politics, something that also echoes — a claim that Coats’s retired predecessor, James Clapper, made in a Senate Judiciary hearing Monday.

“We assess that Russian cyber operations will continue to target the United States and its allies to gather intelligence, support Russian decisionmaking, conduct influence operations to support Russian military and political objectives, and prepare the cyber environment for future contingencies,” the report says.