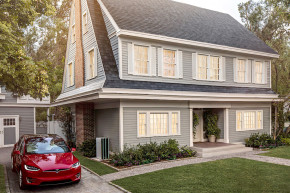 Elon Musk wants to broaden the appeal of rooftop solar

Tesla has begun selling its long-awaited solar roof tiles in the U.S., offering an alternative to the traditional unsightly panels that can deter some homeowners from making the switch.

The black tempered glass tiles are currently available in smooth and textured patterns that look a lot like everyday roof tiling. Bronze Tuscan-style and slate rock-resembling tiles will also be available next year. Compare that to typical solar panels that look — at best — like bathroom tiling, and the appeal is obvious.

The Associated Press reports that in a conference call with press on Wednesday, Tesla CEO Elon Musk called a solar roof “the only sensible vision of the future,” and worked to quell concerns surrounding the initial cost of purchasing installing the system. He estimates that homeowners going solar with his system can expect a cost around $21.85 per square foot of roof, which is cheaper than some expected. According to Tesla, this is significantly less than the cost of active solar paneling (but nearly twice as much as traditional roofing).

Installation and the cost of the battery will certainly not be cheap in itself, but that initial cost is offset by a federal tax credit and massive savings down the road, Musk noted. The solar tiles — which he claims are just as durable and more aesthetically pleasing than traditional roof tiles — have a warranty of the house’s lifetime.

This is a feat the company has been working towards since Musk co-founded the solar power-providing company SolarCity in 2006, which recently merged with Tesla. Musk has been a longtime proponent of solar energy, underscoring at various points. The company has been using its solar panels to power nearly all of a remote island in the American Samoa called Ta’u, which has nearly 600 residents. According to a blog post from Solar City published last year, the project, which was funded by the U.S. government and American Samoa Power Authority, helped save Ta’u residents from using over 109,500 gallons of diesel each year.

Solar power has been making steady gains as an energy resource in the U.S. in recent years, as the amount of photovoltaic panel installations nearly doubled from 2015 to 2016. This means solar experienced the most growth among energy sources being used in the U.S., over both natural gas and wind. The majority of these changes have not occurred within the residential sector, however.

While President Donald Trump continues to push for fossil fuel use, innovations like these, if implemented, could help put sustainability at the forefront of America’s energy future.