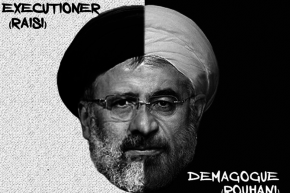 From Outside Iran, Opposition Calls For Election Boycott
By Gilad Shiloach

From Outside Iran, Opposition Calls For Election Boycott

From the campaign against the Iranian elections
By Gilad Shiloach
May 11, 2017 at 8:58 AM ET

Iranian expatriates who oppose the theocratic regime governing in Tehran are driving an online campaign to boycott the country’s upcoming elections. Vocativ has found that the push, which began last month and has now reached over 300,000 posts, is being orchestrated mainly by accounts belonging to the National Council of Resistance of Iran (NCRI), a France-based opposition group considered one of Iran’s most powerful opposition movements.

The three leading candidates in Iran’s presidential elections on May 19 are President Hassan Rouhani and the conservative candidates Ehbrahim Raisi and Tehran Mayor Mohammad Baqer Qalibaf. Raisi, one of four Sharia judges, oversaw the executions of thousands of political prisoners in 1988. Qalibaf is a former commander of Iran’s Revolutionary Guards corps.

The anti-election campaign includes hashtags like #Shamelections, #MyVoteRegimeChange, “Boycott the faked election” (#تحریم_انتخابات_قلابی) and others. It says that “there is no difference between Rouhani and Raisi,” and portrays the two candidates as two sides of the same coin. “What election?! It’s a puppet show run by [religious leader Ayatollah] Khamenei to create the illusion of a democracy,” one person purporting to be an exiled Iranian living in Europe tweeted. Others attacked Rouhani saying he “has been directly involved in all of Iran regime’s crimes” and “has overseen the arrest, torture, and executions of hundreds of people over his four-year presidency.”

Vocativ found that most of the tweets originated outside of Iran, from countries including France, Germany and also Albania, where the NCRI has a significant presence. According to reports, Senator John McCain, Chairman of the U.S. Senate Armed Forces Committee visited reportedly met with NCRI officials in Albania last month, praising them for their “sacrifice for freedom” in Iran.

NCRI users also uploaded videos allegedly showing Iranians in public places in Tehran and Arak holding signs against elections, or against Rouhani or Raisi. The actions were said to have been coordinated organized by Mujahedeen e-Khalq (MEK), the military wing of the NCRI, which was once listed as a Foreign Terrorist Organization by the United States.

There are between 5-6 million Iranians living abroad, compared to the country’s population of 79 million. Iranians can vote in the elections at 279 polling stations in 103 different countries, an Iranian official said.

According to Reuters, Rouhani is expected to be re-elected because of wide support he enjoys among urban populations and women who welcome relaxed restrictions on social behavior and fear a return to hardline theocratic rule. But Iran’s opposition claims, the opposite, arguing that the number of executions, for example, have spiked during Rouhani’s presidency.

there is no difference between Rouhani & #Raisi
#Iranelection #ShamElections
pic.twitter.com/r1EJa4WgyJ

#MyVoteRegimeChange
in solidarity with the brave people within #Iran who have said NO to entirety of this regime!#Iran #ShamElections pic.twitter.com/5lk7a5Pvfx

@nytvideo these r #ShamElections #Iran's not a true democracy 2have fair elections, regime has these charades to gain legitimacy #MyVoteRegimeChange pic.twitter.com/u5qTs5pTaF