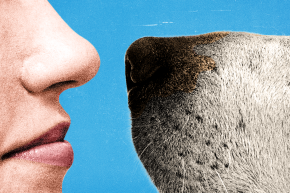 Actually Humans Can Smell Just As Well As Dogs Can, Thanks
By Alasdair Wilkins

Actually Humans Can Smell Just As Well As Dogs Can, Thanks

If you think humans have a weak sense of smell, don’t worry, you’re not alone. Scientists have thought the same for nearly 150 years, even though they never had any particularly good reason to. Our poor sense of smell is a myth so deeply entrenched that even experts kept repeating it for more than a century without bothering to fact-check it.

In a review article published in the latest issue of Science, Rutgers University neuroscientist John McGann looks back on more than a century’s worth of research into our sense of smell. He explains the confusion over our supposedly weak noses goes back to Paul Broca, a French physician who in the late 19th century did pioneering study of the brain’s anatomy. Broca’s work attempted to identify the precise parts of the brain that were responsible for specific functions. He argued the size of the frontal lobe — large in humans, small in other animals — explained why we have language but other species don’t, and indeed a part of the brain involved in language processing is now known as Broca’s area.

He extended this logic to his study of the olfactory bulb, the part of the brain that processes smells. Our olfactory bulb is relatively small when compared with other animals, which led Broca to conclude our sense of smell is less important. That conclusion tied in with Broca’s larger efforts to demonstrate all the things we think of as essentially human could be located in the structure of the brain, removing any need for a soul. This move drew the ire of the Catholic Church, which decried Broca’s research as atheist and materialist.

Broca’s goal was to demonstrate where human rationality came from, and here our small olfactory bulb came in handy. He argued that other animals with large olfactory bulbs were guided, even controlled by their overwhelming sense of smell. Humans and other primates, he said, could make decisions based on what Broca viewed as more sophisticated mental processes.

At no point did Broca ever bother to actually test humans’ sense of smell, he was simply arguing that smell didn’t matter to humans as much as it did to other animals like dogs. Ever since, scientists started calling our sense of smell feeble and almost vestigial. It wasn’t until the late 20th century that experiments began looking beyond the size of the olfactory bulb to figure out how well we could smell. But even as scientists began moving away from Broca’s ideas, the myth had firmly taken hold in the public consciousness, and it persists to this day.

In this article, McGann points to recent research that has found most animals have roughly the same number of neurons in their olfactory bulbs, regardless of how wildly the structure’s size varies between different species. That means most animals have comparable senses of smell, though there are genetic variations between species in terms of which scents are easiest to pick up. Humans, for instance, are particularly sensitive to the odor of a particular chemical compound found in bananas.

But those are just details: The human sense of smell is plenty powerful. Indeed, as persistent as the myth is, this really shouldn’t be that surprising: Anyone who has ever had a particular odor trigger a memory knows how much smell can affect us. And while dogs are famous for their scent-tracking prowess, humans are actually just as capable of following such a trail, even being able to search for and pick up a lost scent just like dogs would. Just because we’ve decided to out-source most of our smelling-based tasks to dogs doesn’t mean humans are incapable of doing them — though that isn’t to say any of us are going to be lining up to go into bomb-sniffing or rabbit-tracking.