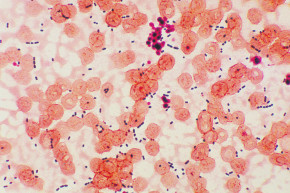 The First Superbugs Are Half A Billion Years Old

Antibiotic-resistant bacteria might be the lurking terror of modern medicine, but these unkillable superbugs existed long, long before the 20th century discovery of penicillin and other drugs. In fact, the oldest superbugs could be nearly half a billion years old, arising alongside the very first animals and amassing their indestructible qualities over the eons.

That’s the finding from researchers at Harvard University and MIT’s Bacterial Genomics Group. They examined the genomes of multiple species of the bacteria enterococcus, which is one of the most naturally antibiotic-resistant microbes. If enterococci as a group really evolved 450 million years old, then they must have adapted to living inside every conceivable animal, from the first one that crawled into land to the dinosaurs to humans. The bacteria would also have survived multiple mass extinction events that killed off a huge percentage of their hosts.

These particular bacteria are able to deal with extreme temperature swings and shifts in the acidity of their environment, as well as being largely unbothered by dry conditions and a prolonged lack of food. Disinfectants and antibiotics alike have little effect on them, making them a challenge to contain and treat whenever they do show up in hospitals.

Enterococci are found in the intestines of just about every land animal, which suggests these creatures have a deep history in the evolution of life on Earth. The group’s genomic research suggests that, as the first marine animals emerged nearly half a billion years ago, the ancestors of today’s enterococci strains were among the microbes to take up residence inside their primordial intestines.

It’s when animals started moving onto land that the true hardiness of enterococci became apparent. Animals routinely poop out some of their microbes. When all animals lived in oceans, bacteria were adapted to their returns to a watery environment, surviving on the sea floor until they were gobbled up again by small scavengers and then in turn by fish, which restarts the cycle. By contrast, microbes excreted onto land often find themselves unable to survive the relatively hot, arid conditions that greet them.

Not so enterococci, which evolved the genes necessary to survive this cataclysmic change in conditions, resist drying out, and live long enough to be consumed once again by another animal. Those same adaptations now make it so difficult for disinfectants and antibiotics to get rid of them in hospitals. And that, as much as anything, speaks to what makes these bacteria so impossible to get rid of. If nearly half a billion years of animal evolution, mass movement from sea to land, and multiple mass extinction couldn’t kill off these microbes — indeed, if they have now taken up residence in the guts of just about every species on the planet — what chance do some trifling antibiotics have?