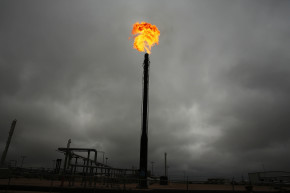 In an unexpected move, the U.S. Senate voted 51-49 on Wednesday to keep in place an environmental regulation designed to limit emissions of a potent greenhouse gas.

Set by the Obama administration in November 2016, the regulation to limit methane emissions on public and tribal lands faced stiff opposition from oil and gas producers, the Trump White House, and conservative lawmakers, even though polling suggests it enjoys overwhelming support in the western states most affected by the rule. Three Republican senators joined all 48 Democrats and independents to keep the regulation in place.

The rule requires energy companies to update their drilling technologies — some of which are decades old — to minimize emissions of methane gas through accidental leaking or venting into the air. Gas producers also wouldn’t be allowed to burn unusable or excess gas, a process known as flaring. The Obama-era Interior Department’s Bureau of Land Management developed the rule to protect public and tribal lands as well as to limit greenhouse gas emissions more broadly.

The Trump administration had thought Congress would kill the rule, under a law that allows it to review new regulations published at the very end of a president’s term. Before Donald Trump’s inauguration, this provision was little-used, but Trump and Congress have used the Congressional Review Act to eliminate 13 different Obama-era initiatives. The House had already voted to overturn the methane rule on February 3.

The methane regulation is particularly important in the West, where the majority of gas extraction occurs and public and tribal lands are especially widespread. A December 2016 poll from Colorado College of seven Rocky Mountain states — Arizona, Colorado, Montana, Nevada, New Mexico, Utah, and Wyoming — found that 81 percent of respondents favored keeping the methane regulation in place, with Republicans and independents actually slightly more supportive of the regulation than Democrats.

Despite this, of those states’ nine Republican senators, only Arizona’s John McCain ultimately voted to keep it. South Carolina’s Lindsey Graham and Maine’s Susan Collins were the other dissenting Republicans. McCain’s vote — and, with it, the rule’s reprieve — was a surprise, as reports leading up to Tuesday’s vote had not listed him among the undecided senators.

I know we're all talking about Comey, but – especially as a former energy nerd – that failed Senate methane vote was a bit shocking.

Double take: John McCain is a NO on proceeding to methane CRA.

Methane CRA is DEAD, 49-51. Enviros have an unusual and unexpected senator to thank for that win: @SenJohnMcCain

It remains unclear what prompted the senator’s vote. An environmental reporter for southern Colorado’s Durango Herald reported the intervention of a local county commissioner made the difference.

Apparently La Plata County Commissioner Gwen Lachelt caught McCain in an elevator and convinced him that the rules were very imp for 4 Crnrs https://t.co/ZD1LolJR1x

In any event, the regulation remains in place, assuming no further Republican legislative wrangling. The vote represents a rare defeat for Senate Majority Leader Mitch McConnell, and an increasingly rare victory for the environment under Trump.