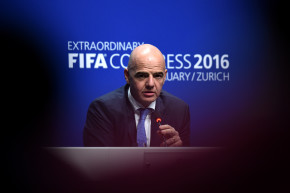 If we don't have The Ethics, we have nothing

On the same day that Donald Trump fired FBI director James Comey who, of course, was investigating the U.S. president, the governing body of soccer, FIFA, did essentially the same thing, dismantling most of the members from its corruption-investigating ethics committee and sanction-giving adjudicatory chamber. In a joint statement, the two dismissed chairmen deemed this the “de facto end of FIFA’s reform efforts.”

For an organization who, in just the last year and a half, has made headlines for its continued corruption—former U.S. attorney general Loretta Lynch deemed it a “a criminal enterprise” and even its lawyers admitted in U.S. court that “FIFA has become notable for the defendants’ bribery and corruption”—as well as pandering to global sponsors, advancing a less qualified candidate over a proven reformer, farcically announcing the completion of its anti-racism task force’s mission, diluting its best product in a cash grab, and facing accusations of abetting human rights violations. (Note: This list might be incomplete, but the point is, hopefully, made.)

During the annual FIFA congress in Bahrain this week—where, oh by the way, a Human Rights Watch activist was reportedly denied entry to the country while seeking an audience with FIFA—soccer’s governing body suddenly parted ways with all but two ethics committee members.

Cornel Borbély, a Swiss prosecutor who led the ethics panel, and Hans-Joachim Eckert, a former German judge leading the adjudicatory group, then held a joint press conference to claim they were not nominated for re-election in a decision that was “politically motivated.” They said this decision has “neutralized” and “incapacitated” the committee’s work, which included “hundreds of cases” that were ongoing. These independent officers helped push FIFA president Sepp Blatter out; Blatter has been banned from the sport for six years.

“This is a huge setback,” Borbély told reporters. “The reform process has at least stepped backwards for several years.”

He rued the lack of a transition period, saying of his successors, “They do not have the experience from day zero. You have to develop this practice, this knowhow. It’s a question how long it takes for the new chamber to investigate these cases to the level that will bring the success.”

Their statement continued, “It appears that the heads of FIFA have attached greater weight to their own political interests than to the long-term interests of FIFA. They have accepted jeopardizing FIFA’s integrity, and, hence, the future of the game.” Their committee had investigated — and ultimately exonerated — sitting president Gianni Infantino for possible violations with his expenses, but the relationship apparently remained “strained.”

FIFA is set to put forward Greek judge Vassilios Skouris and Colombian lawyer Maria Claudia Rojas in their place, with FIFA vice president Victor Montagliani defending the decision to BBC Radio 5, “It’s not like we replaced them with non-independent people.” The official said the decision was “absolutely not” politically motivated and credited their “yeoman’s work” yet offering this rebuke: “It’s been way overblown from a hype perspective. I’m a little uncomfortable when judges start speaking in the media, either during their tenureship or even after their tenureship. I think that is quite unprofessional.”

Exclusive: How US law professor Joseph Weiler terminated his job at the Governance Committee of #FIFA last night: pic.twitter.com/JmVqP98zUo

“There has been a night of the long knives,” an anonymous senior FIFA official told the Financial Times, which reported that Maduro’s departure was motivated by his move to block Russian deputy prime minister Vitaly Mutko from the ruling FIFA Council. (Among other statements, Mutko has made, in the wake of the Olympic doping reports that “Russian sports are among the cleanest in the world.”)

Last October, after Montagliani had acknowledged some “toxic waste” in FIFA’s recent past, this sentence appeared in the Vocativ article discussing those comments: “Perhaps ‘ethics’ and ‘soccer’ will, some day, be used in the same sentence.” This story, commenting on the sudden dismissal of soccer’s ethics chairs, is a rather perverse fulfillment of that hope.