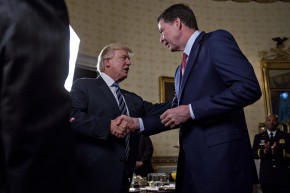 Twitter Blows Up With ‘Impeach’ Mentions After Comey Firing

President Trump's surprise firing of former FBI Director James Comey on Tuesday night has a lot of people on Twitter talking about dictatorships, democracy and impeachment.

President Trump and former FBI director James Comey in happier times. — Getty Images
By Sara Morrison and Tanya Bekker
May 10, 2017 at 10:55 AM ET

There were also many comparisons to former President Richard Nixon, who had the special prosecutor investigating him fired. (Though, as the Nixon Presidential Library helpfully tweeted, Nixon did not fire the director of the FBI.) There were 75,387 mentions of “Nixon” and “Trump” covering the 12 hours after Comey was fired.

Comey’s sudden unemployment comes after similar moves made against other officials appointed by former President Barack Obama were charged with investigating the Trump administration, including Acting Attorney General Sally Yates and U.S. Attorney for the Southern District of New York Preet Bharara. The move has also renewed calls from certain members of Congress, including Republicans, to appoint a special prosecutor to investigate the Trump administration’s possible ties to Russia, as more people who ordinarily would have headed such an investigation are replaced with Trump loyalists.

The former FBI director’s was framed by Trump, Attorney General Jeff Sessions and Deputy Attorney General Rod Rosenstein as a response to how he handled the investigation into Hillary’s Clinton’s email server. But Twitter doesn’t seem entirely convinced that Comey’s firing is solely about his behavior toward the investigation of Clinton’s emails and has nothing to do with Comey’s involvement in an investigation into Russian interference in the presidential election and Trump’s associates possible collusion with Russia. Comey only acknowledged this was happening in March, and he said it actually began last July, during Trump’s presidential campaign.