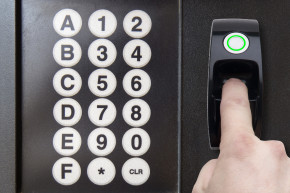 The annoyance of having to wait in line for a cold one at a baseball stadium has been long-regarded as a necessary evil. But one tech company that works in the medical cannabis market aims to change the way we access adult-only products. Its new vending machine can identify users by the unique vein patterns in their fingertips.

American Green’s machine is a step up from ZaZZZ, a medical marijuana vending machine the company first created in 2014. In order to use ZaZZZ, customers could simply scan their IDs and medical marijuana card. Eighteen ZaZZZ machines have already been put in place in states where medical cannabis dispensaries are legal such as Arizona, Colorado, and Seattle.

With the company’s new machine and app, which is just a demo for now, users would first register an account with American Green. After it then manually checks identification, customers who use the machine need only input their username and password, verifying it with a finger vein scan. Finger vein scans work by transmitting infrared light through the finger to capture the finger vein profile.

American Green is primarily focused on the legal cannabis industry and is working with dispensaries in the Bay Area to begin installing machines in the coming months. But Lindel Creed, vice president of automatic machine technology and development, thinks it’s only a matter of time before the company expands its reach to other adult markets.

More Every Single Person Has A Unique, Traceable Digital Fingerprint

Casinos, entertainment venues, hotels, and pharmacies were among those he mentioned to Vocativ at a demonstration of the machine on Tuesday in New York City. Sample products listed on the vending machine’s display screen included allergy, emergency contraception, hard liquor, cold beer, and cigarettes. A feature Creed described as being ideal for casinos was a game that users could play in order to bypass having to pay for their product.

The demo machine contained sample pregnancy tests, which Creed suggested drugstores have taken an interest in. In selling pregnancy tests, he said, some drugstores claimed to experience shoplifting when the item was available in the aisles. But when they were put behind the counter, meaning it would be necessary to ask an employee to get them, customers would avoid purchasing them altogether — making a vending machine an ideal middle ground.

In addition to the biometric fingerprint sensor, each vending machine is equipped with a camera, which is for security and, to some degree, identification. Theoretically, the camera is supposed to be able to identify users as either male or female and a young adult or adult in order to help suggest specific products. (As a 24-year-old who was identified by the camera as being too young to theoretically purchase 18-and-above products, it’s clear it’s not perfect.)

More MasterCard Wants To Link Your Credit Card To Your Fingerprint

While the idea seems practical and convenient enough, some may be wary of a future in which their full name, phone number, e-mail address, and biometric data is linked to their purchases of potentially sensitive products.

“The database itself is secure,” Creed said. “You gotta go through a three-step process to get to the product. So I think your data is secure as it is any other place like you give your data to Google. It’s just the age we live in now.”

However, though the company only has plans to store customer data — including name and purchase history — internally, Creed says he can’t rule out the option of of making said data available to third parties.

More The Cashless Future Will Be A Surveillance Nightmare

Another concern should vending machines like these become widely-used, or even ubiquitous, is how this kind of automation could affect those typically tasked with checking IDs and dispensing adult-only products.

“We’re not gonna be a company that goes, ‘Well, we’re not going to take someone else’s job,’ Someone else is going to jump in behind us and do the same thing,” Creed said.

“As technology evolves the people coming into the workforce need to adapt for that new technology: how to work on the controls of the system, how to set up the machine, maybe be a machine operator, things like that. So instead of taking a role of simply handing somebody something you’re gonna educate yourself a little bit further and go into a more technical role with our equipment. Which’ll even increase your salary maybe a little bit.”