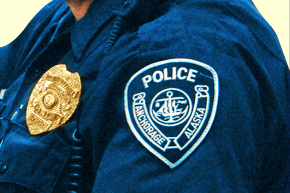 Alaska Police: We Need To Have ‘Sexual Contact’ With Sex Workers
By Tracy Clark-Flory

Alaska Police: We Need To Have ‘Sexual Contact’ With Sex Workers

The Anchorage Police Department is fighting a pair of state bills that would criminalize cops who have “sexual contact” with people under investigation. The reason for the opposition, according to Deputy Chief Sean Case, is that there are “very, very limited” situations in which cops need to cross that boundary — specifically, when it comes to undercover investigations of sex workers.

In an interview with Alaska Dispatch News, Case argued that such a law would allow sex workers to avoid arrest, since it provides them with a way to check if a potential client is a cop. “(In an undercover investigation) they ask one simple question: ‘Touch my breast.’ OK, I’m out of the car. Done. And the case is over,” he told reporter Michelle Theriault Boots. “If we make that act (of touching) a misdemeanor we have absolutely no way of getting involved in that type of arrest.”

This is why the Anchorage Police Department has actively lobbied against the companion bills, House Bill 112 and Senate Bill 73, which are currently stuck in committee in the state legislature. The bills classify “sexual penetration” and “sexual contact” in these cases as sexual abuse. Interestingly, Case says the department isn’t interested in making arrests for sex work in general and is instead focused on sex trafficking in particular, which raises the question of whether police are specifically advocating for the need to have “sexual contact” with trafficking victims.

Sex worker advocates argue that this — as well as “sexual contact” with independent sex workers — would amount to “state sponsored sexual assault.” The department did not respond to a request for comment by press time.

The bills at issue are the result of activism by the Alaska-based Community United for Safety and Protection (CUSP), which alleges that sex workers in the state have been subjected to sexual abuse by police during undercover busts. The group’s website features several testimonials from women with stories of cops allegedly groping and even having “sex” with them during undercover stings. (“Sex” is in quotes here, because under these circumstances it would be based on deceit and is arguably better described as sexual abuse.)

“It’s traumatic to be in the middle of a sexual encounter and then suddenly be slapped into hand cuffs,” said Terra Burns of CUSP. “People have told me that years later they still have PTSD symptoms when they see a police car.”

Initially, it seemed that the bills would have no trouble passing. “Police and prosecutors insisted that police never engage in sexual conduct during stings anyways,” she said. “Then right as the bill was about to be heard they changed their story and now claim that they need to engage in sexual conduct with sex trafficking victims in order to rescue them.” She adds, “We are calling on our elected officials to say this is wrong, this is criminal behavior, and make it illegal.”

Maxine Doogan, a member of CUSP, said she’s relieved to finally see officials acknowledge that there are circumstances under which police would have sexual contact with a sex worker. “I am happy that they’re finally admitting it, and that they’re on record,” she said.

This issue isn’t limited to Alaska. Last month, Michigan’s Senate voted to put an end to a law that previously provided immunity for cops who have “sex” with sex workers during the course of an investigation. It was the last state in the U.S. to explicitly allow for police immunity in those circumstances — but sex worker advocates say that every state needs bills like those proposed in Alaska that expressly define “sexual contact” with sex workers during investigations as sexual abuse.

That said, these laws only go so far, according to activists. As Maggie McNeill, a sex worker based in Seattle, told Vocativ, “No matter what the law says, cops will keep raping sex workers, either in stings or outside of them, for as long as our profession is criminalized because they know damned well there’s nothing we can do about it.”