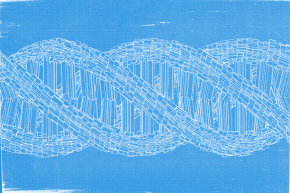 Scientists Working To Build A Human Genome Struggle With Transparency

At meeting this week, organizers tried to strike a balance between openness with public and restrictive scientific publishing rules

Researchers are pushing forward on a project to one day create a synthetic genome of humans and other organisms, a development that could result in new ways to treat disease and even affect our fundamental understanding of human biology, yet also presents challenging ethical questions. At a recent scientific meeting questions remained about how much should be shared with the public.

On Tuesday and Wednesday, more than 200 prominent geneticists, biologists, technologists, and enthusiasts gathered in downtown Manhattan for a meeting of GP-write, a project with the goal to “understand the blueprint for life provided by the Human Genome Project.”

The researchers plan to develop the scientific and technological tools necessary to synthesize genetic code inexpensively and efficiently. While the ease with which scientists can read DNA has sped up dramatically in the past 15 years, their ability to write it is much farther behind. They can synthesize small bits of DNA, and even have created small viral and bacterial genomes from scratch, but eventually the goal is to tackle genomes of more complex microbes, plants, and even humans. Accomplishing this could give scientists cell lines for research and the production of biologic drugs, safer and innovative therapies to treat disease, microbes that could help nourish our bodies where food is scarce, or even complex data storage.

This is the second meeting of GP-write. Last year’s meeting, held in Boston in May, drew controversy, mostly due to its opacity. Concerns about the ethics driving an advance as dramatic as a synthetic human genetic code, something that has the capacity to “completely redefine the core of what now joins all of humanity together as a species,” as one researcher wrote, demand constant dialogue beyond the scientific community. But instead of inviting that conversation, the meeting appeared closed and secretive — it was capped at 130 scientists with no members of the media present.

The meeting organizers say their hands were tied by scientific publishing rules — an article outlining their work was going to be published in the journal Science, which does not allow researchers to discuss results publicly before publication (the article was published the following month). Media coverage of the meeting itself, however, contained a lot of hype and few facts, since the organizers couldn’t talk to the press. However, GP-write’s organizers did listen to public feedback generated from those articles, Nancy Kelley, the coordinator of GP-write, told Vocativ, and broadened the focus of the project beyond synthesizing human DNA.

Though they do plan to synthesize human DNA eventually, they realized that “the human part needed to be put off until the ethical implications were fully explored,” Kelley said.

For this year’s meeting, Kelley said, the project organizers wanted a more open meeting, and 22 reporters representing well-known magazines, newspapers, and web sites were on the list of attendees (I had recently reported on GP-write for CNBC). Some of the initial sessions were live streamed to hundreds of viewers, Kelley said. The overall vibe was congenial and collaborative.

But there was a caveat. The night before the meeting, members the media received an email that included a media policy. Because some of the presentations contain unpublished data, we were asked, as “a professional courtesy,” to “refrain from sharing screen shots of the slide presentations and any scientific data shared at the meeting unless you have permission from the presenter” or “publishing any content without permission from the scientist in question.” A bolded note to the same effect was inside the packet of materials handed to all attendees. The speakers were supposed to note on their slides whether the data was unpublished, Kelley said, but sometimes they forgot. Some people still took photos of slides, but the Twitter dialogue was relatively sparse.

For most researchers, the policy didn’t seem strange. Several scientists and ethicists told Vocativ it’s common to limit what can be shared at scientific meetings to promote openness within the scientific community because it allows researchers to discuss their unpublished work without violating journals’ policies and without fear of others beating them to it.

The policy is in line with “standard norms of academic discourse at scientific conferences,” Barbara Evans, the director of the University of Houston Law Center and one of Tuesday’s speakers who mentioned the importance of transparency in GP-write, told Vocativ via email. “It’s a little counterintuitive, but true, that reasonable restrictions on communication can serve to promote transparency, if the restrictions encourage people to feel comfortable about sharing their original thoughts and ideas.”

To others, however, the policy was less natural. There were many attendees who were not actively participating in research and might not have ever come to a scientific meeting, so they weren’t used to the rule, especially because there was such little unpublished data presented. And, given the number of speakers who mentioned the importance of public interface and participation, the policy could even seem contradictory to some journalists.

“But despite opening their doors, [GP-write organizers] still have a ways to go to embrace transparency. The day before the meeting, a PR exec gave reporters new ground rules: No publishing content without permission from the scientist involved,” reads Stat News’ email newsletter sent early Tuesday, before the meeting started.

One attendee named Bryan Bishop, whose interest in biology is strictly a hobby, took transcripts of the first of Tuesday’s talks and posted links to them on Twitter. He told Vocativ he was tapped on the shoulder by one of the meeting organizers and asked to stop. The following exchange happened on Twitter:

.@kanzure we only asked you not to publish transcripts after the webcast because our scientists are presenting unpublished research #GPwrite

Bishop said he didn’t know about the media policy and told Vocativ via email: “I think that everyone means well at GP-write. I don’t feel offended — they are still figuring how GP-write works and what’s in their DNA… I wasn’t expecting a blanket ‘don’t post any content at all’ especially after hearing the Center say kind words about the virtues of transparency and inclusiveness.”

If anyone is restricting the transparency of the meeting, it’s the scientific journals, said Eliza Strickland, a senior associate editor at engineering magazine IEEE Spectrum. “I fault these journals for wielding their power in an old-fashioned and outdated way that interferes with the free flow of scientific information, but I don’t fault scientists or conference organizers for complying with their rules.”

Journal policy or not, transparency has to be at the heart of GP-write, and last year’s firestorm showed what can happen if it appears compromised. Jeffrey Bessen, a chemistry graduate student at Harvard who is on GP-write’s public outreach committee, felt the media policy is justified, but says that he understands the “optics” of appearing as transparent as possible. “I think there’s trust to be regained. That policy to me doesn’t read like it’s not transparent, but to someone else it might.”

The project organizers know this and say they are committed to it. Various sessions at the two-day meeting were dedicated to ethical concerns and public outreach; a committee met to discuss how the organizers can best have an open conversation about their work. The dialogue will be ongoing, especially if the scientists get closer to synthesizing a human genome.

“We’re going to continue to be as open as we possibly can,” Kelley said.