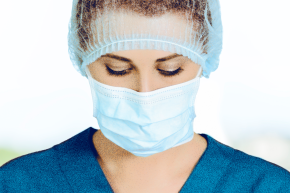 This Mother’s Day, it might be worthwhile to give a special shoutout to those moms who have also devoted their careers to medicine.

According to a new survey published Monday in JAMA Internal Medicine, it seems nearly four of every five women doctors with children have experienced discrimination on the job — often directly tied to their motherhood.

Researchers polled more than 5,550 members of an online forum and website exclusive to working physician mothers called the Physician Moms Group. Seventy-eight percent of respondents reported feeling discriminated against for any reason. More than 65 percent said it was because of their gender, while just over a third said their discrimination was specifically related to being a mother.

“Despite substantial increases in the number of female physicians — the majority of whom are mothers — our findings suggest that gender-based discrimination remains common in medicine, and that discrimination specifically based on motherhood is an important reason,” the authors wrote.

There’s no shortage of research showing a wide-ranging bias against women doctors. Most recently, a 2016 study found that women academics employed at 24 public medical schools were dramatically underpaid compared to their male coworkers. Even after accounting for other factors, like seniority, the number of patients seen, and medical speciality, the average wage gap between men and women was $19,878 a year. A recent survey released last December similarly found that male doctors across nearly every field reported higher salaries than women outside of the medical school setting as well. Men were also less likely to hate their jobs.

In the Physician Moms Group survey, common forms of maternal discrimination included feeling mistreated by nursing staff for breastfeeding, or feeling like they were passed over for promotions and raises because they had taken maternity leave. They also felt they were often left out of administrative decisions and held to a double standard for their job performance compared to other doctors.

These added burdens didn’t come without a price either. Women who reported maternal discrimination were also more likely to experience burn-out than everyone else — 46 percent vs 34 percent.

“Physician mothers treat patients, raise children, teach students and care for sick relatives and friends. But who looks after them?” said study author Dr, Eleni Linos, an assistant professor of medicine at the University of California San Francisco, in a statement. “We need to make sure these women get fair and unbiased treatment at the workplace. The role of physician mothers is essential and we can’t afford to lose them to burnout.”

The authors note that since the site they surveyed is explicitly a support group, it’s possible the women who responded may not be a true reflection of how often in general women doctors with children experience discrimination. At the same time, the survey is the first of its kind to examine how motherhood specifically affects perceived discrimination among women physicians, they wrote.

The Physician Moms Group, founded in 2014, has over 60,000 enrolled members, according to the authors, one of whom is a board representative and founder of the organization.