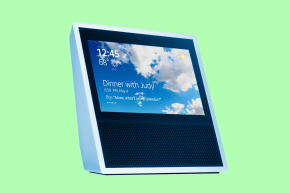 New Amazon Echo Will Now Have A Camera And Screen

Amazon releases the Echo Show into a market it already dominates

Amazon, which first created the market for voice-activated home devices that is increasingly crowded, is now aiming to push it forward with a new product.

The online retailer officially announced its new Amazon Echo Show on Tuesday, which is similar to the original Echo, except it’s squared and has a touch screen and camera. The touchscreen on the Show will allows users to look up information about their search queries, see full weather reports, play videos from YouTube and Amazon Video, watch news briefings, and make video calls.

The Show will also support Amazon’s voice assistant Alexa, which means that users can control other internet-connected devices in their home, like lights and cameras, and access Amazon’s other services. However, the most interesting feature the Show has is “Drop In,” which allows designated friends and family to make a call (video and audio) at any time — it’s very “Zenon: Girl of the 21st Century.”

Amazon’s voice-activated products have raised privacy and security concerns in the past, though Amazon has resisted turning over data to police, and there’s no doubt that the Show will continue the trend — especially since it now comes with both a camera and a microphone. Photos of the Show had been leaked earlier this week, but Amazon didn’t confirm the products existence until Tuesday morning when it started selling it online for $229.99, which is a fair bit more expensive now than the original Echo ($149.99). The Show will eventually start shipping on June 28.

Amazon’s new voice-control speaker was announced just a day after Harman Kardon’s Invoke speaker was released, which is powered by Microsoft’s Cortana AI voice assistant. Invoke was released to take on the Amazon Echo, but given Amazon’s success and wide range of services, Harman might not be much of a competition. Amazon is currently dominating the nascent market for voice-controlled speakers, according to research firm eMarketer.