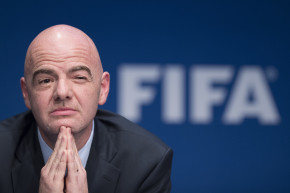 A novice beat an experienced and reform-minded opponent because FIFA

Recent changes to FIFA’s bylaws allot one seat on its leadership council per federation to a woman.

For an Asian federation representative, there was Moya Dodd, a former Australian national player with three decades of law and business experience who served from 2013-2016 as a non-voting member of the Executive Council, advocated for reform in FIFA following exposition of the rampant corruption scandal, and campaigned for the very woman-designated seat she was now seeking.

Her opponent in the election was a Bangladeshi soccer executive named Mahfuza Akhter Kiron, who earlier this year forbade her country’s women’s national team from speaking with the media because she was upset by negative press and who, when asked who the most recent winner of the women’s World Cup was, needed three guesses to identify the U.S.

My vote was with @moyadodd. This is very disappointing. https://t.co/UM36jXpA6T

The BBC World Service reporter, Mani Djazmi, who asked Kiron to name the World Cup winner explained her reasoning for the question:

Mahfuza Kiron’s lack of Women’s World Cup knowledge was by no means indicative of women in football or proof that women’s football is some obscure, sub-sport.

Rather, it was an indictment of the system within football politics that allows under-qualified people to rise to positions of huge power and influence.

There are many men here, at the Fifa congress, who would be equally as ignorant as Ms Kiron.

To ask a member of world football’s ruling council such a basic question is not an easy thing to do. It is very offensive, to question the knowledge of someone in that position.

I did so because I had a tip-off that previously, Ms Kiron had struggled with even more basic football knowledge, so I thought I’d test her.

Perhaps journalists should factor such trivia questions into every interview with members of Fifa. The results may be interesting.

Djazmi’s point is sound, that this election should be less a condemnation of Kiron specifically but of FIFA generally. Her opponent couldn’t have been more qualified. Dodd wrote a New York Times op-ed in 2015 to promote the role of women, noting that fewer than half of FIFA’s national federations even support girls soccer programs and citing research showing that board rooms reaching a 30-percent threshold of gender balance benefit from a culture shift. Just look at countries like Saudi Arabia, which recently voted down a measure to offer girls and women better access to sports. The New York Times’ Juliet Macur described Dodd as “a FIFA insider who thinks like an outsider.”

That is, of course, exactly what a corrupt body like FIFA desperately needs. Dodd took the high road in a long Facebook post, congratulating her opponent, reiterating that the changes made on her watch will help women in the sport, and pledging to keep working in some other capacity, writing, “In football, the ball doesn’t stop rolling for long, and there are many ways to contribute to our game.” She signed the post with the new feminist rallying cry, #persist. The closest she came to criticism of the apparently anti-reform vote was to tell reporters, per ESPNFC, “People will interpret it in their own ways.”

Maybe Kiron will make her own meaningful contributions to FIFA and for women, or maybe the only thing to persist will be FIFA’s system of patronage.