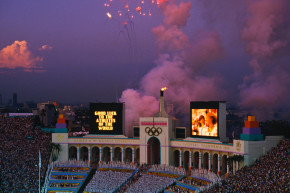 As more and more people become aware of just how much hosting the Olympics costs, you can expect this to become a familiar story

The International Olympics Committee arrives in Los Angeles on May 10 for a three-day inspection-slash-tour. Olympic officials will be treated to sumptuous meals and lavish accommodations—but publicly, so no one can dare accuse the city of bribing government officials!—shown the in-progress and already-completed sites, hang out with wealthy power brokers, and be subjected to what’s sure to be a slew of dull-as-hell Power Point presentations.

If the tour proves impressive enough to The Powers That Be, it will go a long way to determining whether Los Angeles or Paris will end up hosting the 2024 Olympics. Luckily, the grassroots activist organization, NOlympics LA, which was formed by members of the Los Angeles branch of the Democratic Socialists of America, has begun mobilizing just as the LA2024 effort kicks into high gear. Their goal: knock some sense into the 88 percent of local residents who currently support bringing the Games back to Los Angeles for the first time since 1984.

As Dave Zirin and Jules Boykoff noted at The Nation, five cities were originally vying to secure the Olympics in 2024, but the list has been winnowed down to two, largely thanks to the efforts of grassroots organizers. When Boston’s bid was announced in 2015, two such groups, Boston Olympics and No Boston 2024 were relentless, bombarding social media with information, showing up at public events, and making sure the public was aware that the city couldn’t guarantee that taxes wouldn’t be used to cover the massive cost overruns that have accompanied every Olympics in recent memory. The bid died.

Similarly, NOlimpia in Budapest, simply by gathering enough signatures to force a possible public referendum, convinced the city to pull out, and Rome’s newly-elected Mayor made it clear that public funds were better served being spent on anything but the Games.

Anne Orchier, one of the co-organizers of NOlympics LA and a freelance strategist and researcher, told the Nation that while stopping this particular bid is the short-term goal, the endgame is to create a world-wide network capable of opposing the IOC and debunking the falsehoods it peddles. They plan to mimic Boston’s brand of activism, ensuring that Los Angelenos are aware that “LA has no shortage of problems that are more urgent than securing the bid,” she said.

Another NOlympics LA organizer, Jonny Coleman, added, “The process is inherently undemocratic and does not take into account the needs of the host city’s residents beyond those who are already rich and powerful, and stand to become even more so from the Games.”

Per The Nation, those needs are:

Los Angeles has the highest number of chronically homeless people in the United States. Relatedly, according to the US Census, LA has more people living in poverty than any other major US city. Last year, LA had the most officer-involved killings in the United States. The LA County Jail is the largest in the country, and its prisoners have issued a staggering number of abuse complaints. NOlympics LA is arguing that to spend money on the Olympics, while all these vital social issues are in play, is scandalous

Yet, Mayor Eric Garcetti continues to sunnily insist that the $5.3 billion that will be spent is “risk-free,” and taxpayers won’t be presented with an unexpected bill. But as Vocativ previously reported, the projected cost of the 2020 Games in Tokyo has already risen by a factor of four, and the Rio Olympics ended up making a dire economic situation so much worse, piling an additional $1.6 billion to the national debt.

And while LA2024 is sure they’ll be the one city to buck the trend, largely due to the fact that 97 percent of the proposed venues are ready to go or already in construction, recent studies have shown that on average host cities exceed the initial projected costs by an average of 56 percent, and that’s before Rio’s total was included. LA2024’s calculations also include shunting the cost for security off on the Federal government. Meaning, American taxpayers are still on the hook, but “now it’s somebody in Texas and Maryland paying for security for the Olympics in California,” as Kelly Gossett from No Boston 2024 recently told ESPN.

Even if you take Los Angeles’ claims at face value (while ignoring their juiced Facebook numbers) and accept that Los Angeles will miraculously turn a profit or cause minimal financial harm, much to the shock of economists everywhere, there’s still the question of the massive reduction of civil rights and ethical compromises that go hand-in-hand with the Games. That can’t be waved away by a spreadsheet that’s in the black.

There’s still time to take action, Los Angeles, before you’re dealing with shit like this: