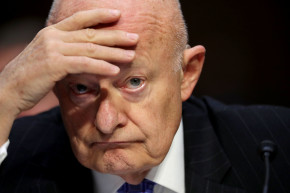 With no additional sanctions in place, the former top U.S. intelligence official issued a dire warning

Speaking before a Senate Judiciary subcommittee, former DNI James Clapper called for retaliation against Russia for its efforts to tilt the 2016 U.S. presidential election in favor of Donald Trump.

“Russia’s influence activities in the run-up to the 2016 election constituted the high water mark of their long running efforts since the 1960s to disrupt and influence our elections,” Clapper said in prepared remarks. “And I believe they are now emboldened to continue such activities in the future both here and around the world, and to do so even more intensely.”

The three largest U.S. intelligence agencies, the FBI, the CIA, and the NSA, made the unusual step of announcing, in January, that they all agreed Russia was behind a series of high-profile hacks and leaks of data designed to hurt Trump’s opponent, Hillary Clinton. Trump himself has largely distanced himself from the attack, and reiterated on May 1 that the culprit “could have been China.” He also claimed that “if you don’t catch a hacker, okay, in the act, it’s very hard to say who did the hacking,” though cybersecurity forensics experts strongly disagree with that claim.

Most recently, hackers hit email accounts surrounding French presidential candidate Emmanuel Macron and released that information through WikiLeaks. Though the timing suggested the act was designed to hurt Macron in favor of his opponent, Marine Le Pen, whose party has borrowed money from Kremlin-linked Russian banks and who has posed with Russian President Vladimir Putin, Macron still won decisively on Sunday. Early analysis of the Macron hacks suggest the same sophisticated hacker group, widely believed by cybersecurity experts to be an extension of the Kremlin, was behind the Macron hack.

To date, the U.S. hasn’t announced any plans to combat Russian election influence outside of the sanctions President Barack Obama implemented soon before the end of his presidency. That should change, Clapper argued.

“If there has ever been a clarion call for vigilance and action against a threat to the very foundation of our democratic political system, this episode is it,” he said. “I hope the American people recognize the severity of this threat and that we collectively counter it before it further erodes the fabric of our democracy.”