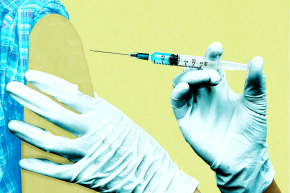 The anti-vaccine movement caused the outbreak, not refugees

For the second time in six years, the Somali-American community in Minnesota is in the midst of a measles outbreak. With more than 40 cases of the disease reported in the last month, health officials fear this one may prove far worse than in 2011.

In an odd turn of events, the latest outbreak places the Somali community between stereotypically left-wing anti-vaccine movement and right-wingers who somehow see the measles cases as proof of the supposed danger that refugees pose in the United States.

The trouble all began more than a decade ago with a pair of tragic, hard-to-answer questions from parents in Minneapolis’s Somali community. Why was autism so common among their children, and why were their children’s cases particularly extreme? Subsequent studies by the Minnesota Department of Health and the Centers for Disease Control and Prevention suggested one in 32 Somali children in the Minneapolis area were on the autism spectrum, compared with one in 36 for white kids and one in 48 of children overall. Worse, basically all Somali children diagnosed with autism also had intellectual disabilities, compared with only a third of children with autism overall.

Medical science has little to offer these parents: no cure for their children’s condition, no clear understanding of what causes it, not even any certainty that the higher autism rate among Somali children is anything more than a statistical fluke. Under such circumstances, it’s not surprising that the parents would look elsewhere for answers. Anti-vaxxers were all too ready to offer the endlessly debunked, completely unfounded explanation that vaccines were the culprit.

Leading anti-vaxxer J.B. Handley wrote an open letter to “Courageous Somali Parents” in 2008, telling them not to trust a CDC “puppet” like the Minnesota Department of Health and offering a range of pseudoscientific recommendations to protect their children’s health. Andrew Wakefield, the former physician whose debunked 1998 research crystallized the antivaccine movement, even came to Minneapolis in 2011, claiming he was interested in studying autism within the Somali community.

Beyond whatever genetic or environmental factors may make Somali children more susceptible to autism, cultural factors also make their parents more willing to consider anti-vaxxer ideas. Mental illness remains taboo in Somalia and other parts of eastern Africa, and so a condition like autism is often unknown to Somali immigrants and refugees when they first arrive in the United States. “I would say it’s probably a good majority of Somalis who have heard of autism, whether they give it a name or not, think that it’s something that’s caused here, that it’s an American problem,” said a Minneapolis social worker interviewed for a 2012 research paper.

And if that’s the case, then vaccines are an obvious, though far from the only, difference between eastern Africa and Minneapolis. “A lot of my families believe it’s the immunizations,” said another participant in the 2012 paper. “Back home we never had shots at all, and now here you have to get all the shots before you start school. A lot of families are concerned, especially about the MMR shot.”

Even so, the Somali community’s skepticism toward vaccines is in large part the result of concerted efforts by American anti-vaxxers to sow doubt and fear within an already vulnerable community. That lends a brutal irony to the fact far-right media outlets like Breitbart News and World Net Daily have seized on the current outbreak as proof that refugees — especially those from Muslim-majority countries like Somalia, which was one of the countries targeted by the Trump administration’s travel ban — present a security risk to the United States. The irony only worsens when you consider the most high-profile anti-vaxxer and the most high-profile member of the far right is the same person: President Donald Trump.

ONLY THE BEST! Minnesota: “The outbreak started among Somali Minnesotans who have a low vaccination rate …" https://t.co/PgrEZI7pQn

It's more then Measles these refugees are bringing back.Why won't the Dems protect our children????
https://t.co/DmBQcMSRQS

Part of the right-wing conspiracy theory is that Minneapolis’s Somali community refuses vaccinations because the Quran forbids them. There’s no evidence whatsoever for this, especially when, again, Somali parents used to routinely get their kids immunized. Thus the current measles outbreak serves as a flashpoint for both anti-vaxxers and the far-right, leaving dozens of needlessly ill children as props in the latest conspiracy-fueled causes célèbres.