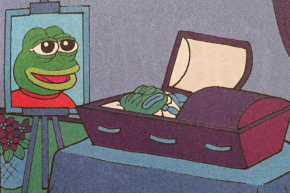 ‘Pepe The Frog’ Has Been Killed, But Not Its Symbolism
By Alejandro Alba

‘Pepe The Frog’ Has Been Killed, But Not Its Symbolism

You can't take back what the internet has wrought

Memes come and go, but Pepe the Frog will forever be remembered as a symbol of hate — even in its afterlife. Matt Furie, the artist who created Pepe over a decade ago to be a pretty chill cartoon frog, published a comic strip this weekend depicting Pepe laid to rest in an open casket. It was his way of symbolizing the death of the meme, even though he can’t really kill it, and everything else it’s associated with.

Pepe the Frog started as a stoned frog in his 20s in Furie’s 2005 “Boy’s Club” MySpace comic, but leading up to the 2016 presidential election, it was adopted by the so-called ‘alt-right’ as a symbol to spread racist messages. It even became a designated hate symbol by the Anti-Defamation League.

Furie tried several times to take back ownership of his cartoon from white supremacists, but struggled. In a Time essay he published October 2016, Furie said the whole experience of Pepe becoming an icon of hate was a nightmare. “The only thing I can do is see this as an opportunity to speak out against hate… I understand that it’s out of my control, but in the end, Pepe is whatever you say he is, the creator, say that Pepe is love,” Furie wrote in Time

Furie then launched a campaign to “Save Pepe” by flooding the internet with nice and peaceful depictions of Pepe, but after failing again, he decided to kill the character as a final way to disassociate from anti-Semitism it took on to represent. Yet, even as the character was laid to rest, that won’t stop far-right white supremacists from appropriating the meme to spread messages of oppression and anti-Semitism.