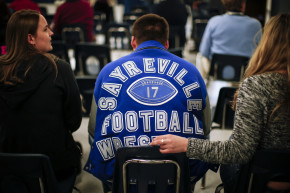 How Sexual Assault Via Hazing Goes Unreported
By Robert Silverman

An investigation by the AP sheds light on the issue

An investigative report published on Monday by the Associated Press examined the precipitous rise over the last 10 to 15 years of sexual assaults perpetrated by male high school athletes on their teammates. The Associated Press found that, in many cases, local law enforcement officials, the local community, coaches, and the toxic culture of sports combined to not just reinforce decades-long, ritualized patterns of abuse, but in some cases worked to actively cover up or minimize the alleged crimes.

One such incident took place on July, 2015, when three freshmen members of the Parkview High School varsity baseball team in Lilburn, GA, were sexually assaulted by five to eight upperclassmen at a tournament in South Carolina. Though one of the perpetrators reportedly issued a warning at a team dinner the night before, telling the freshmen to “sleep with one eye open tonight,” coaches took no extra security measures or did anything to prevent what transpired.

Via the Associated Press:

At the team hotel later, with coaches nowhere in sight, five to eight upperclassmen barged into a room and ordered three freshmen out of hiding. Over shouts of “get his ass,” they pinned down one boy, and through his shorts, he felt fingers shoved into his rectum. They pulled down another boy’s shorts. He got them back up, but the attackers grabbed and punched his testicles. The third managed to flee.

No charges were ever filed against the upperclassmen, either in South Carolina, where the alleged crime was committed, nor in Georgia. At a suspension hearing, the case was treated as an example of bullying or hazing, and not a sexual assault:

In the Georgia case, a draft public statement from the Gwinnett County Public Schools initially said a player’s family had reported he was “sexually assaulted,” according to records AP obtained. But the final version referred only to “inappropriate physical contact.” When asked, district officials said that wording was “more inclusive” of the “diversity of the types of misconduct alleged.”

Months later, after several upperclassmen were disciplined in part for sexual battery or aggravated sexual battery, the district shared the public statement that described the ordeal as “hazing.”

It’s understandable—if horrifying to contemplate—why school officials would want to downplay these alleged crimes, or dismiss it as a “tradition” or “boys being boys.” But these barbaric rituals partly persist because the community will often rally around the alleged perpetrators, making life hell for any kids that dare to speak out. One father of a victim in Leechburg, PA, where members of the basketball team were “held down and [had] a stick named the ’yoshi stick’ shoved or attempted to be shoved into the rectum,” a team-building practice that had been taking place for over a decade, told the Associated Press, “We’ve pretty much been ostracized from the community.”

Charges were ultimately not filed because there were no laws on the books criminalizing “hazing,” according to law enforcement officials.

But when it comes to maintaining silence, the first and most potent enforcer is the team itself. The demand for absolute loyalty and strictly-enforced hierarchy is central to the appeal of these proto-Fight Clubs, a social group that is defined by and driven by the paradigm of Us Versus Them. If you can survive the abuse, you are by definition a strong, powerful man, and, in a literal vicious cycle, are required to pass on those lessons to the next generation. But if you dare talk about what goes on behind closed doors, you’re one of them.

Ratting out a fellow athlete is a sign of weakness and a betrayal of the highest order, all of which feed into the notion that there is no greater humiliation a man can suffer than being feminized, specifically as a victim of sexual assault. As Susan Lipkins, a psychologist and author, explained to the Associated Press, “What’s worse for a young jock than to be emasculated to the lowest level, to be like a girl?”

As the the Daily Beast reported, in Ooltewah, TN, when a kid who was assaulted by the varsity basketball team had the temerity to tell his coach that he was being bullied, it drove his tormentors to inflict even greater harm.

He was repeatedly sodomized with a pool cue by far bigger, stronger seniors. His colon was ruptured, and his bladder and prostate were punctured, an attack that was “so brutal that the tip of the pool cue snapped off inside him and had to be surgically removed.”

A nurse who treated the victim ended up reporting the crime, not the coaches, even though they took him to the hospital. While he was being treated, the wife of one of the coaches tidied up the scene, throwing the bloody garments away. According to investigators, she was “essentially erasing evidence of the crime.”

The Associated Press’s full report can be read here.