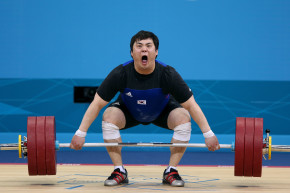 The key to sick gains is a string of unprintable epithets

When reaching down into one’s soul for a little extra energy to finish a race, score a touchdown, or grab a rebound, nearly every athlete, no matter the level of competition, has felt the same urge: to curse.

And now science has confirmed whether it’s effective. The verdict? You better fucking believe it.

Richard Stephens, a psychologist at England’s Keele University, conducted experiments involving both intense physical tests starting at both a high heart rate and at rest—a max-effort 30-second exercise bike challenge and a hand-grip power squeeze—and found that participants who cursed performed better than those who said neutral words during the hard times. Those pedaling had a 4.6 percent increase in peak power (i.e. the first five seconds) and 2.8 percent gain in average power and those squeezing had an 8.2 percent increase in strength.

“We’re not telling people something they don’t already know, but we’re verifying that in a systematic and objective way,” Stephens told the Guardian. “I think people instinctively reach for swearwords when they hurt themselves and when they’re looking for an extra boost in performance.”

This builds on earlier work from Stephens, the psychologist hero of the blue-talking set, who found that swearing can minimize the effect of pain. (His reported advice: “I would advise people, if they hurt themselves, to swear.”)

And you all thought Kevin Garnett was just a profane potty mouth on the basketball court when really all his MF this and MF that were science-approved techniques to improve performance.

A couple years ago, Patriots quarterback Tom Brady was caught cursing so much on camera that the Boston Globe named him its Poor Sport of the Week. That prompted Brady to give a stirring defense of the f-bomb in a WEEI interview, which he acknowledged was a “great word.”

“We’re not choirboys, I know that. So you bring us up to a certain level of intensity to the game, and it’s your job is to go out there and physically, emotionally, mentally dominate the game,’’ Brady said in 2014, adding: “You’re always trying to raise everybody’s level of awareness, raise their level of play so that you can go out there and be as excited as you possibly can, so I’ve always played that way, and I probably will until the day I hang these cleats up.”

Retired soccer star turned broadcaster Rio Ferdinand was once so perplexed that Manchester United’s Wayne Rooney received a ban for cursing that he tweeted a question, “So, just for clarification is swearing banned on the pitch totally??”

Rooney had just completed a hat trick when he turned to the camera and cursed—and received a two-game suspension for his effort. The difference, you see, is that swearing only helps athletes in the moment; profanity before or after exertion isn’t of any use and seen as a bad example for the kiddos. One must be strategic with f-bomb deployment on the pitch, field, rink, or court.

There is a caveat to the notion profanity-bolstered pain tolerance: subsequent work showed that, the more someone swore on a daily basis, the more impervious he or she was to the effect of the protective cloak of the curse-word. Like any addiction, its effect can wane.

The researcher did note some confusion over his finding, namely that swearing did not induce a corresponding rise in heart rate or other discernible adrenaline release the way there was with the pain mitigation experiment. Stephens theorized that perhaps the psychological mechanism in play was of diminished inhibition or what he calls “letting go,” which he described as reduced fear that overexertion would lead to injury or embarrassment. If that’s the case, he wrote, swearing could also help other physical undertaking such as balancing and maybe even cognitive tasks. That’s some good shit.