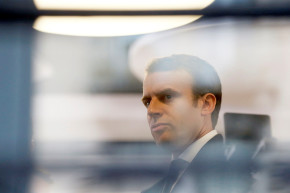 France is scrambling to contain a massive leak that targeted presidential front runner Emmanuel Macron. After thousands of documents hacked from Macron’s campaign were released on Friday evening, mere minutes before the candidates ended their active campaigning and just two days before Sunday’s decisive runoff, the country’s presidential electoral authority, the CNCCEP, has warned domestic media outlets not to publish any content from the leak over concerns that it may influence the election’s outcome.

In a press release issued Saturday, the CNCCEP warned that the “dissemination or rebroadcasting” of the leak’s contents, posted on Twitter by WikiLeaks, “is liable to be classified as a criminal offense.” It also called on the media, as well as citizens, to not publish anything related to the largely unverified documents “in order not to alter the sincerity of the vote.”

Macron’s campaign said the hack published a trove of emails, campaign financing information, and other documents. However, his team dubbed the leak an attempt at “democratic destabilization, like that seen during the last presidential campaign in the United States,” according to Agence France-Presse.

Hillary Clinton has said recently that she lost the presidency to Donald Trump last year partly due to “Russian WikiLeaks.” The organization, alleged by many to be a Kremlin tool, published a collection of stolen emails from Clinton campaign Chairman John Podesta prior to the U.S.’s election last year.

On Friday, however, WikiLeaks tweeted that it had “not yet discovered fakes” in the leaked Macron documents, adding that they are “very skeptical that the Macron campaign is faster than us.”

The leak came as polls had the centrist, pro-European Union Macron beating rival Marine Le Pen, a far-right candidate, by a lead of 62 percent to 38 percent.

Florian Philippot, a senior Le Pen aide, tweeted that the leak might include information that French media outlets have purposefully kept under wraps. But despite the CNCCEP’s warning, French news outlets have reacted differently to the issue: The left-leaning Liberation site on Saturday featured stories on the hack, while the Le Monde newspaper said it would not cover any of the information included in the leak before Sunday’s vote.

The roughly nine-gigabyte data dump posted to the anonymous document sharing site Pastebin, however, was not the first attempt by Macron detractors to influence Sunday’s election. Local authorities were already looking into false allegations made about the front runner, while Macron filed a lawsuit over claims he had dodged taxes in France by using a haven in the Caribbean. Further, a Macron aide all the way back in February blamed Russia for attempting to hack the campaign.

Vitali Kremez, director of research with the cyber intelligence company Flashpoint, told Reuters that he believed APT 28, a group with ties to the GRU, Russia’s Main Intelligence Directorate, was responsible for Friday’s leak. The Kremlin, however, has denied any such involvement.