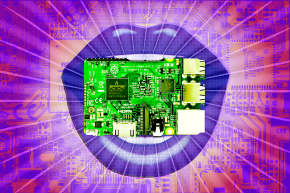 Google Wants You To Build Your Own Alexa With This ‘DIY A.I.’ Kit
By Janus Kopfstein

Google Wants You To Build Your Own Alexa With This ‘DIY A.I.’ Kit

Digital assistants like Google Home and Amazon’s Alexa are extremely popular — despite the obvious privacy issues of putting an always-listening, internet-connected microphone or camera into your home.

Now, Google is encouraging people to build voice-activated AI helpers of their own with a new DIY kit for the ultra-cheap Raspberry Pi microcomputer.

The kit, called “AIY” for Artificial Intelligence Yourself, includes a clip-on hardware attachment for the Pi, a $35 credit card-sized device that has become a kind of Swiss army knife for hobbyists prototyping Internet of Things devices. Once attached along with an included microphone and speaker, the Pi gains the ability to do natural language processing tasks using Google’s AI voice assistant software, essentially turning the device into a scrappy, DIY version of Google Home or Amazon’s Echo.

The effort is reminiscent of Google’s Cardboard headsets, which the company gave out for free as a low-cost introduction to VR. The Voice HAT kit similarly comes with its own cardboard shell, and is being packaged with the newest issue of Raspberry Pi’s official magazine, The MagPi.

The completed device costs under $40, and can be programmed to respond to custom voice commands while offline using its built-in AI software. But that software is still created and controlled by Google, suggesting the project is a way to get developers interested in creating new functionality for the Google Home platform — and in doing so, expand the company’s ability to mine data.